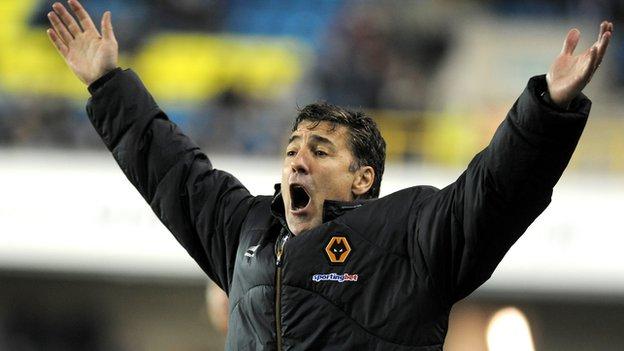 Wolves manager Dean Saunders has once again bemoaned the "fine margins" denying his team the results he feels they deserve in their battle to avoid relegation from the Championship.

Wolves have only won once in 11 games since Saunders took over in January.

But he believes Bakary Sako hitting the bar in Saturday's 3-1 defeat at Nottingham Forest summed up their luck.

"When you're down at the bottom they don't go in. These are the fine margins that you have," Saunders told BBC WM.

"We've made chances in every game and we just don't take enough of them.

"Dave Edwards had a great chance early on at Forest, then Sylvan Ebanks-Blake had a great chance on his left foot. And, as for Bakary Sako hitting the bar and the ball bouncing down on the line, that's the second time that's happened."

Both Saunders, with Doncaster Rovers, and Wolves suffered the pain of relegation 12 months ago and are under threat of an unwanted double.

To make matters worse for Saunders, having swapped jobs to move from Doncaster to Molineux in January, his former club are now three points clear at the top of League One.

And with Wolves having dropped to 23rd on Tuesday night, thanks to Barnsley's win over Brighton and Peterborough's draw at Leeds, Saunders could be facing another more embarrassing swap, this time of divisions with Doncaster.

The immediate outcome of slipping back into the relegation zone, having escaped it with last Tuesday night's 2-0 win at Millwall (Wolves' first victory under Saunders), is setting up this Saturday's battle of the bottom two at Molineux when Wolves face Bristol City.

"This team have been losing for a long time," admits Saunders. "But it is my job to lift them and we'll be ready for the Bristol City game.

"The players had a go at Forest. We created enough to get something and it's just not gone our way. But we've got to be up and ready for Saturday."

After being roared on by an impressive 2,267-strong away contingent at the City Ground on Saturday, Wolves defender Matt Doherty, who has impressed since being brought in by Saunders four games ago, says the fans can play a vital role to play in the game.

"We gave everything again at Forest," he told BBC WM.

"The amount of fans there was fabulous for an away game in the Championship. If they keep supporting us, we'll get out of it."