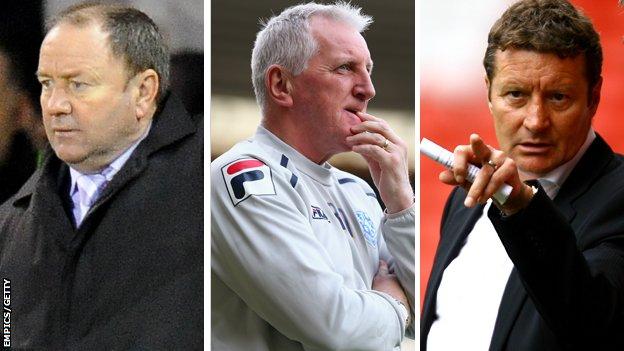 The gap between Premier League leaders Manchester United and second-placed Manchester City is 12 points, Barcelona top Spain's La Liga by 13 points while Bayern Munich are 20 points ahead of the chasing pack in the German Bundesliga.

Those leagues might be settled but in League One the picture could not be more different.

With just seven weeks of the regular season left the top 10 teams in the division are separated by 11 points.

Doncaster currently lead the way on 68 points with neighbours Sheffield United three behind with one game in hand.

But that is not even half of the story.

Five weeks ago a resurgent Bournemouth topped the table after a great run of results following the return of Eddie Howe as manager. However, the Cherries found the going tough at the top and lost five successive games to slip to seventh.

Sitting just above them in the play-offs are a Brentford side who took Chelsea to an FA Cup replay, Swindon, still recovering from the circus of Paolo Di Canio's sudden departure as manager, unfancied Tranmere, who did not lose a game until 20 October, and Yeovil, who won eight successive league games from December through to February.

Look just beneath the top seven and Walsall, Coventry and Leyton Orient are all in with a fighter's chance.

The Saddlers went on a 16-match winless run earlier in the season but have now turned their season around in spectacular style, the Sky Blues continue to keep pace with the pack despite playing amidst a backdrop of financial uncertainty and the O's have overcome the pain of missing out on a trip to Wembley in the Johnstone's Paint Trophy by recording three wins from their last four games.

Yeovil boss Gary Johnson admits it is a unique situation: "I've never been involved in anything like it - it's so tight now and I think it will get tighter.

"There's still an unbelievable amount to play for. We're still there, and that's the big thing.

"I think it could go right down to the last day and it will be about the spirit you go into games with and a little bit of luck as well."

Johnson is a seasoned veteran when it comes to promotion races - in his first stint with the club he led them from non-league to the third tier in three seasons, and helped Bristol City gain Championship status in 2007.

The business end of the season: Ten key fixtures in the next four weeks

He told BBC Somerset: "We're just about hanging on in there and there's still nine games left with plenty of points to play for.

"There'll be a couple of teams who might come out the pack. Walsall have been there or thereabouts, and you don't want Bournemouth breathing down your neck because you know what they can do."

Tranmere boss Ronnie Moore is doing his best to keep it together but it is not easy.

He has seen his side lose six of their last nine matches as their form threatens to desert them just when it matters most. He even apologised to fans after Tuesday's defeat at Walsall.

The former Rovers striker told BBC Radio Merseyside: "I've never been so angry. It's a good job we're not fourth bottom because I'd be out of work with the way we played. There was no fight, no spirit, no desire, no commitment - all those words.

"We've got to move on. Mental strength has been lacking in the past two months for me and we're not having it any more. We will not win another game playing like that [at Walsall]."

Moore is now in his third stint at the Prenton Park helm and is desperate for the side not to blow their shot at promotion.

"We've got eight games to go now and we've been so near," he said. "These opportunities in life don't come that often and you've got to grasp it.

"I've said to the players you look back on the words I've said to you and everyone will think 'he was right what he said' because I've been there, I've seen it and I know what it's like."

Moore and Johnson are not the only experienced heads in the promotion shake-up.

Doncaster turned to 57-year-old Brian Flynn when Dean Saunders left for Wolves in January and the former Wales youth coach has kept the club at the top of the division.

Across South Yorkshire, Danny Wilson and the Blades are fighting it out at the top end of League One for a second successive season.

He has rebuilt the squad that suffered the double ignominy of missing out on automatic promotion to Sheffield Wednesday on the final day of the season before losing to Yorkshire rivals Huddersfield in the play-off final at Wembley.

Play-off final heartache is nothing new to Wilson - he has previously lost out with both Bristol City and Swindon.

Understandably the man who took Barnsley to the Premier League in 1997 is keen to do it the straightforward way this time out. He told BBC Radio Sheffield: "You've just got to win your games. If it takes you to the top then it does and that is the aim.

"We'd love to be sat in first with three or four games to go and no one be able to catch you. The way it is going I don't see that happening. I expect it to go to the last couple of games.

"The players have been great all season but you have to pull out a bit extra. If you can't do that now then you'd have to question yourself.

"We've got quite a few who have been here before so I'm hopeful they can stand us in good stead."

With Wilson hopeful, Moore vexed and Johnson worried about the state of his health, there is a lot more to come from League One this season.