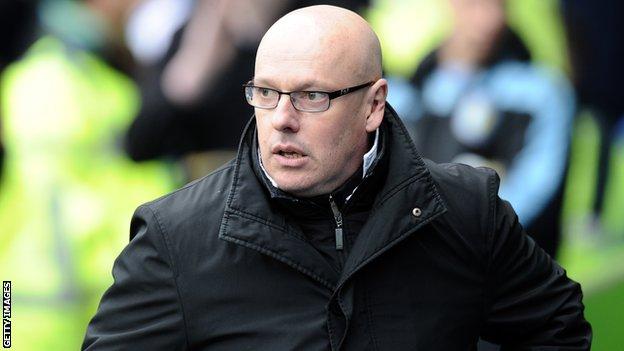 Brian McDermott's successor as Reading manager will not only be fighting the drop, but fighting history too.

That is because no Premier League club in the relegation zone has ever stayed up after a late-season change of boss.

McDermott left his job on Monday, with Reading in 19th place, four points from safety with nine games left.

It is the 10th time in Premier League history that a club in the bottom three have changed managers after 1 February - and the previous nine all went down.

Here, BBC Sport picks out five late-season managerial changes that failed to pay off - and three that did.

A classy midfielder who was key to Sampdoria's 1991 Serie A title-winning side, Lombardo's first foray into management was brief, bizarre and unexpected.

In March 1998, with Crystal Palace fighting relegation, without a home league win all season and in the midst of a takeover, manager Steve Coppell moved to become director of football, having learned he was to be replaced at the end of the season by Terry Venables.

Lombardo, signed from Juventus the previous summer, was named Coppell's temporary replacement - despite the fact he spoke little English and had to use team-mate Tomas Brolin as an interpreter.

The Italy international managed two wins in seven matches before resigning as manager at the end of April as relegation was confirmed, and Palace finished the season with chairman Ron Noades and coach Ray Lewington in temporary charge.

Lombardo stayed on as a player until January 1999, when he left for Lazio, and has been on the coaching staff at Manchester City since 2010.

Mick McCarthy led Sunderland to promotion from the Championship in 2005, but was sacked in March 2006 after picking up only 10 points from 28 Premier League games.

Despite the club's poor league form, it was a sacking that baffled the club's players. "Things could have been done at Christmas," midfielder Liam Lawrence said at the time. "I don't understand the timing. It's come at the wrong time for us."

Assistant academy manager Kevin Ball was placed in charge until the end of the season, with no upturn in form, and relegation was soon confirmed.

The most memorable incident of Ball's reign concerned a home match against Fulham in early April 2006, which had to be abandoned after a snowstorm reduced play to a farce.

When the game was replayed in early May, Ball guided Sunderland to their only home league win of the season - and his only victory as a manager.

Chairman Niall Quinn took charge at the start of the following season, before Roy Keane arrived to lead the club to promotion.

A Geordie born and bred, Shearer had scored 206 goals in 404 appearances over 10 years as a player at Newcastle, making him the club's all-time scorer.

With his home-city club plummeting towards relegation in the spring of 2009, Shearer agreed to return as manager to try to save them.

Newcastle had been through a turbulent season, with Kevin Keegan's resignation in September prompting a fan backlash that led owner Mike Ashley to consider selling the club.

Joe Kinnear's spell as interim manager cut short when he underwent triple heart bypass surgery in February and coach Chris Hughton was unable to stop them from slipping towards trouble.

Sadly for Newcastle, neither could Shearer. Appointed on 1 April, he won only one of his eight league games, and the club were relegated on the final day.

Hull manager Phil Brown had celebrated Premier League survival on the final day in 2009 by taking to the pitch and singing Sloop John B.

But if he was convinced that Hull's trip to the top flight was the best trip he had ever been on, it soon became a nightmare.

With club debts climbing to £35m and the threat of administration looming as relegation beckoned in March 2010, Brown was placed on gardening leave and Dowie brought in to try to prevent the drop to the Championship.

Given the title of football management consultant, Dowie managed only six points from a possible 27, and relegation was confirmed with one match still to play.

It was the fifth time in his career that Dowie had been associated with a club during a Premier League relegation season - he had been a player at Crystal Palace in 1994/95, a manager at Selhurst Park in 2004/05, boss at Charlton during the early months of 2006/07 and Alan Shearer's assistant at Newcastle during the final weeks of the 2008/09 campaign.

Terry Connor was not Wolves' first choice as manager when the club sacked Mick McCarthy in February 2012.

But when Walter Smith, Alan Curbishley and Brian McDermott ruled themselves out, chairman Steve Morgan turned to the man who had been McCarthy's assistant.

"This is a decisive step that creates certainty," Morgan said at the time. Sadly for Wolves, it also turned relegation into a certainty.

Connor managed a point in his first game, as Wolves drew 2-2 at Newcastle. But things went downhill from there, as he failed to win any of his 13 games in charge.

And yet his managerial career was to have a curious post-script. Connor went to Ipswich as McCarthy's assistant in November last year, and took charge of the side for a Championship game against Middlesbrough on 2 February when the manager was ill. The result? A convincing 4-0 victory.

AND THE CHANGES THAT PAID OFF

While no Premier League club in the bottom three has ever escaped by changing a manager after 1 February, there are tales of sides in trouble who have made successful late-season appointments.

Coventry were only two points outside the bottom three when they sacked Phil Neal on 14 February 1995 and brought in Ron Atkinson. Indeed, Neal's last act as manager had been to secure a 2-0 win at Crystal Palace that had lifted the club out of the relegation zone.

Atkinson had 14 games to pull Coventry clear of trouble and managed it, starting his reign with a six-game unbeaten run as they finished the season in 16th place.

Seven years later, in March 2002, Everton were outside the relegation zone only on goal difference when they sacked Walter Smith.

Chairman Bill Kenwright sacked Smith after a dismal 3-0 FA Cup quarter-final defeat at Middlesbrough, and moved to bring in David Moyes from Preston.

Moyes had only nine games to secure safety, but won four of them and lifted Everton out of danger.

Three years later, he guided the club to Champions League qualification, and this week celebrated his 11th anniversary in charge at Goodison Park.

But the most spectacular late-season managerial challenge in Premier League history happened at the other end of the table.

Roberto Di Matteo replaced Andre Villas-Boas in March last year, with the club fifth in the Premier League and on the brink of exiting Europe.

Di Matteo not only managed to keep Chelsea in Europe - he also managed to guide them to the Champions League title as they beat Bayern Munich in the final on penalties.

But his stay in the Stamford Bridge manager's chair was to be only temporary, as he was sacked in November as the club failed to negotiate the Champions League group stages.