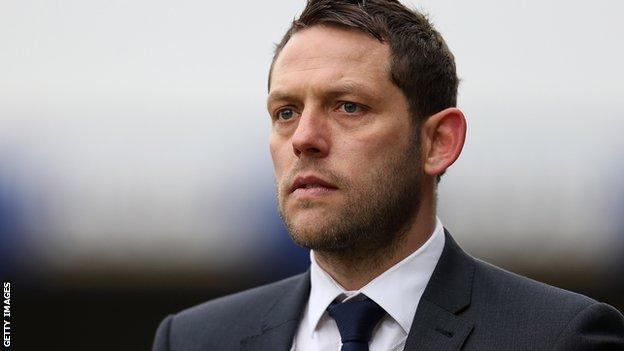 Accrington manager Leam Richardson has challenged his squad to be ready for the fight to stay in League Two.

Stanley sit bottom of the Football League following the 3-0 defeat to Fleetwood Town at the Crown Ground.

"The situation we find ourselves in is as bad as it gets but lets not waste time with the negatives," the 33-year-old told BBC Radio Lancashire.

Since the turn of the year Accrington have taken just 10 points from 12 matches.

"We need to address it, stand up, individually and collectively and have a fight, have a really good fight."

Richardson took over at Stanley last November following the departure of Paul Cook and was handed a two-and-a-half-year deal.

The former Blackburn, Bolton, Notts County and Blackpool defender is still registered as a player with Accrington but has not appeared since December 2011.

The club have endured a difficult start to the new year having won just twice in 2013 so far, and the defeat to Fleetwood, courtesy of Jon Parkin's hat-trick, was their biggest at home since August.

"From the first to the last minute, as a group, myself included - I must take the blame for that along with the lads. It's not good enough by a long shot," Richardson added.

"We came into the game off the back of some really good performances, good results which could have gone our way even more so.

"We've got to be careful as a club that we aren't defeated as we've got a lot of football left.

"You learn from things very quickly and this is just one of those learning curves for me, but the message is it needs to be addressed quickly."