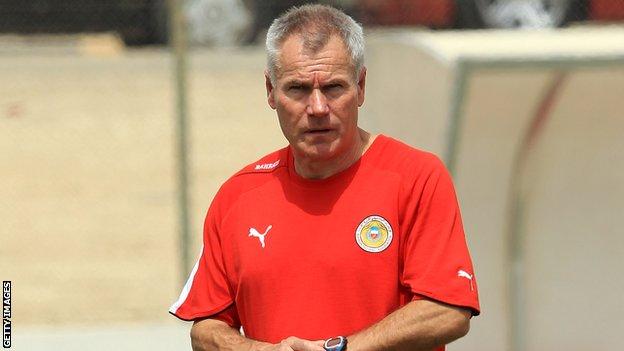 Peter Taylor has been named England's head coach for the Fifa Under-20 World Cup finals in Turkey this summer.

The former Leicester manager, who had a spell in caretaker charge of the senior England side in 2000, has been appointed on a two-month contract.

England will be one of 24 teams at the finals in June and July, with the draw taking place in Istanbul on 25 March.

"I just hope we can get the best players available to go out there and do well," Taylor said.

But he will instead be involved with England at the Under-21 European Championships in Israel, which overlap with the Under-20 finals.

The Under-20 tournament will begin on 21 June, with the final taking place at the Ali Sami Yen Arena in Istanbul, home of Galatasaray, on 13 July.

He added: "I am very pleased and I am looking forward to it.

"I remember watching the 1997 Under-20 World Cup in Malaysia with Howard Wilkinson and I know what a big tournament it is.

"Michael Owen played in that one and it just shows how big the tournament is and the type of player it attracts - Lionel Messi has twice won player of the tournament before."

Taylor, who has also managed Gillingham, Brighton, Hull, Crystal Palace, Stevenage, Wycombe and Bradford, had one match as caretaker manager of the senior England side after Kevin Keegan resigned in 2000.

He took charge of the side as they lost 1-0 to Italy in a friendly in Turin, and made David Beckham England captain for the first time.

He was appointed manager of Bahrain in July 2011, but left the post in October last year.

Taylor added: "I have been very fortunate to have had two spells with the FA and even though this latest one is short-term it is a tremendous feeling to have another opportunity to come back.

"The experience is the most important thing. Any level under the senior team is about readying players for that moment. This tournament will be good for young players."