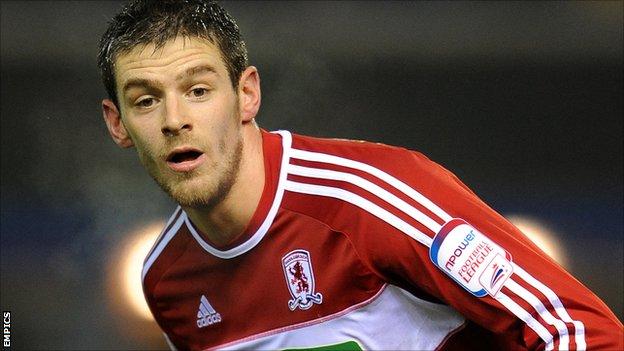 Striker Lukas Jutkiewicz has said positivity is essential if Middlesbrough are to maintain their dented Championship promotion hopes.

Boro have dropped to ninth place, triggered by nine defeats in 12 league games since the turn of the year.

"Seven points from a possible 36 is not good enough from any of us," Jutkiewicz told BBC Tees.

"The only way to be in this industry is positive, anything other than that is not going to change anything."

He added: "You allow yourself a day or two to dwell on the result and then move onto the next one.

"We have to make sure as individuals and as a team we're doing the right things.

"The manager said this week we're not cutting corners, if we're not successful it won't be a lack of trying or covering all areas."

Jutkiewicz's presence has been missed up front following an ankle injury - one of several niggly problems at the Riverside this season - having scored 10 goals for the Teessiders prior to the absence.

Goalscoring has been an issue in tandem with the run of defeats, with just 10 league goals scored since the turn of the year in contrast to 45 between August to December 2012.

"I've just started training again and the ankle feels good," the 23-year-old continued. "I'm positive about it, so hopefully it'll be sooner rather than later.

"It's been stop-start for the entire season and incredibly frustrating, in particular because for most of my career I've not really struggled but it's been one after the other this year."

Jutkiewicz joined Middlesbrough from Coventry in January 2012 for a fee in the region of £1.3m.