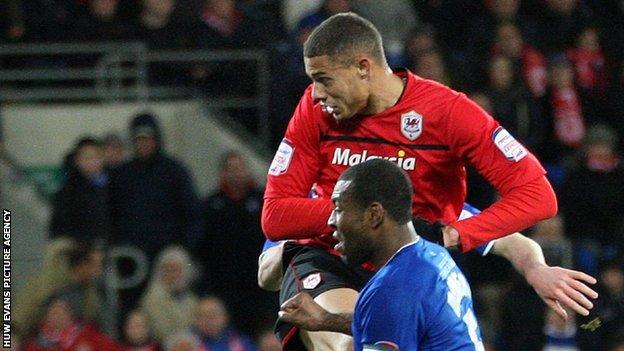 Striker Rudy Gestede had a simple message to Cardiff City fans after his late equaliser against Leicester City: "One point is better than nothing."

Second-half substitute Gestede headed past Kasper Schmeichel in the third minute of injury time to earn a 1-1 draw at the Cardiff City Stadium.

It left City four points clear of nearest rivals Hull and the Frenchman content with his contribution.

"We got a point in the end, and that's better than nothing," he said.

League leaders Cardiff were minutes away from a third defeat in five matches when Gestede powered in a header from Andrew Taylor's cross.

It saved the Bluebirds' blushes, although with 10 matches left the 11-point lead they held in January is a distant memory - although the south Wales club do have a game in hand on their rivals.

Gestede, who made only his fourth appearance since the New Year against the Foxes, believes Cardiff just need to concentrate on their strengths to clinch promotion.

"I don't think it's about pressure," he said.

"We have 10 games to go, we've been top of the league for a long time. We know what we can do, we know our strengths.

"We just need to play like we know we can. I trust in my team and I think we'll get this [promotion].

"A point is a point. Hull are doing very well, they try to put pressure [on us], but we know we need to be focused on the next game we don't need to think about pressure.

"One point is better than nothing."

Gestede's view was echoed by manager Malky Mackay, who said he was proud of his team's fighting spirit, but is not looking further ahead than next Saturday's match at Sheffield Wednesday.

"It's about making sure that we just stay focused on our task in hand, " he said.

"We've got to make sure that we only look at the team that's in front of us.

"Everyone else is in the same boat in terms of chasing, in terms of picking up points every week and knowing that wherever you go in the division there's tough games."