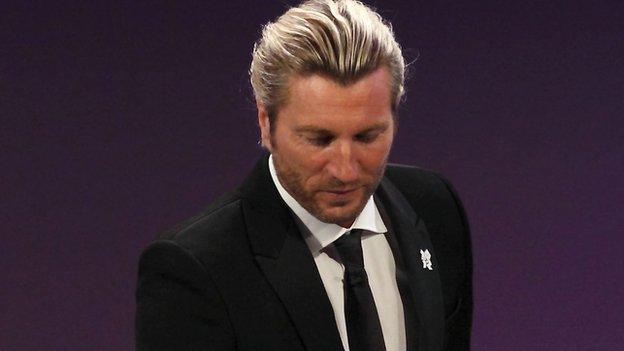 Robbie Savage claims Wales' 2014 World Cup qualifying clash with Scotland on 22 March is not a "huge" game because "even if they win, they're out".

Wales have won just once in Group A, a 2-1 triumph over Scotland in Cardiff in October 2012.

Manager Chris Coleman names his squad on Wednesday, with Savage offering a sobering assessment of their displays.

"Let's make no bones about it, the qualifying campaign was over ages ago," Savage said.

"But I think it's a good learning curve for the youngsters. Chris Coleman is starting to get it together."

Wales play Scotland at Hampden Park, before hosting Croatia in Swansea on 26 March in the second match of the double-header.

Manager Coleman has injury concerns over Liverpool midfielder Joe Allen, who requires surgery on a shoulder problem, and Celtic defender Adam Matthews, who has a hamstring injury.

However, both are expected to be named in the squad, while Crystal Palace's uncapped 19-year-old midfielder Jonathan Williams is also set to be included.

Savage, capped 39 times for Wales, believes a win would help build confidence and improve the country's seeding for future tournaments.

"I think the game is important because the higher the team can finish in the group then the better the seedings will be for the next draw," he said.

"But whether they beat Scotland or not they're out.

"So it's not a huge game really. Let's not hype the game up too much."

Manager Coleman has seen his team win twice in seven games since taking over the role following the death of Gary Speed in November 2011.

The circumstances were difficult for the new manager says Savage, but he believes the team is showing significant improvement.

"It's been difficult for him [Coleman] because of he way that he got the job," said Savage.

"[But] there has to come a time when he puts his team and his methods into play and I think he's doing that now.

"I believe Chris Coleman is a passionate Welshman who is the right man to take Wales forward."

Savage, speaking on BBC Radio Wales Sport, also gave an honest assessment of the current team, claiming that Coleman was in a familiar position to many previous Wales managers.

"All down the years we've either had a great defence, a great midfield or a great attack. Unfortunately never all in one season and that's why we struggle," he said.

"I think defensively we're okay. I think Ashley Williams for Wales isn't as good as he is for Swansea.

"The midfield [of] Joe Allen, [Gareth] Bale and [Aaron] Ramsey could be a fantastic. But we can't score goals.

"If you're relying on [Steve] Morison and [Sam] Vokes to score your goals in international football you've got no chance.

"Will Chris [Coleman] give Bale a free role? Because I think we rely much too heavily on Gareth Bale, as probably Spurs do at the minute."

Wales have won two of their last three matches, scoring five goals in the process - four of them by Bale.