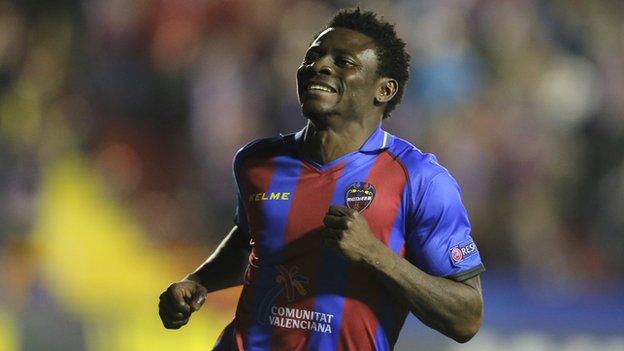 Nigeria striker Obafemi Martins has expressed his relief at completing his protracted move from Levante to Seattle Sounders after an administrative delay.

The 28-year-old announced he would join the Major League Soccer side last month but was held up by his Spanish club.

Sounders have now paid the 3m euros [about $4 million] to trigger Martins' get-out clause after lengthy negotiations with Levante.

"It's great to finally get it sorted out," Martins told BBC Sport.

I'm still very ambitious, still hungry for lots of success so hopefully I can contribute a lot at Sounders

"It had been talked about for a few weeks so it's nice to know where I stand. I can't wait to meet the player, fans and officials of Seattle Sounders."

The former Newcastle and Birmingham City striker was expected to leave for the United States on Tuesday but said he will first "try to sort my working visa from here before I leave for Seattle to finally sign the contract papers".

Once that business has been concluded, Martins is eager to make an impression on his new employers.

"Hopefully I can bring something to the table, I've been lucky enough to be involved in some good squads before in my career and I will do my very best for the club," he said.

"I'm still very ambitious, still hungry for lots of success so hopefully I can contribute a lot at Sounders and I hope it goes well."

The Nigeria international joined La Liga side Levante last September after a disappointing stint at Russia's Rubin Kazan, where his time was blighted by injuries and loss of form, forcing the team to banish him to the reserves.

Martins took a massive pay cut to seal a move to Spain in search of regular football.

If the plan was to win over his many critics via decent performances in the Spanish league, the concept has clearly worked out for the Super Eagle.

He has revived his career at Levante, scoring the winner on his debut and going on to net eight further goals in 24 appearances.

"Levante fans supported me through thick and thin, that way I am grateful for their support," he said.

"I will always cherish that but now I need to wish them well and give my best to my new club in the United States."

Martins, who began his career in Nigeria with FC Ebedei, has also played club football in Italy.