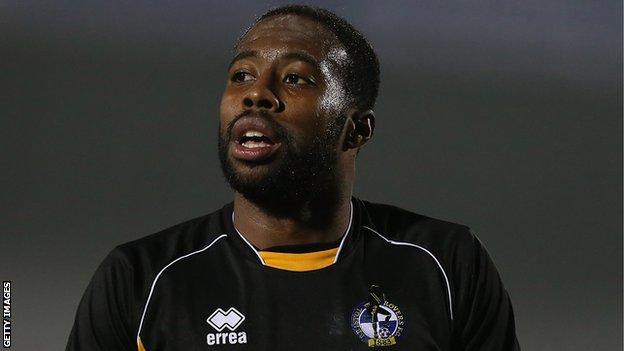 Bristol Rovers manager John Ward has said he is frustrated by the frequent injury problems of Joe Anyinsah.

The 28-year-old Pirates forward has been struggling with a persistent hamstring injury in recent weeks.

Anyinsah returned to the starting XI for Saturday's 2-0 defeat by Chesterfield, but only lasted 45 minutes before limping off.

"For him and the rest of us it's annoying," Ward told BBC Radio Bristol before Tuesday's game with Port Vale.

"It's a huge frustration because on Thursday and Friday he trained really well, but on Saturday he was a passenger for the first half and didn't get out of first gear."

Anyinsah has made 27 appearances this season, scoring four times, but has been taken off in the first-half in his last two games.

Ward did not give a timeframe for the former Carlisle and Charlton player's return, but confirmed he would not be available to face League Two promotion chasers Vale.

"He's got a problem with his hamstring and we're going to have to keep him out the way and deal with it," added Ward.