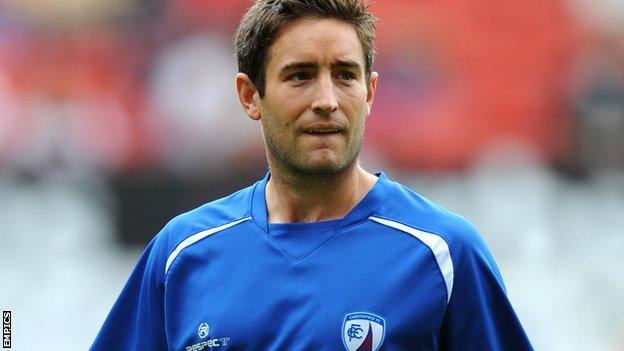 Lee Johnson began his managerial career with a victory as his Oldham Athletic side beat Hartlepool United to move out of the League One relegation zone.

Johnson, 31, became the youngest boss in the Football League when he took charge of the Latics on Monday.

Robbie Simpson put the hosts ahead, heading home Jose Baxter's cross, before Jean Yves Mvoto nodded in from another Baxter delivery to make it 2-0.

Baxter got the third with a half-volley from the edge of the penalty area.

The Latics had been without a permanent boss since Paul Dickov quit on 3 February and Johnson guided his team to their first win in four games.

Oldham had failed to score in their previous three matches and Baxter, who missed a penalty in his side's 1-0 defeat against Bournemouth on Saturday, played a key part in all three goals.

His left-wing cross was headed in by Simpson from inside the six-yard area in the 17th minute, before Mvoto scored a similar goal 10 minutes later.

Baxter made the game safe when he made it 3-0, firing in a low half-volley after good work from Lee Croft.

Hartlepool's Steve Howard and Antony Sweeney missed headers as Pools failed to find the net for the fifth successive game.

The result takes the Latics up to 20th, one point and one place above Scunthorpe in 21st position, while Hartlepool, without a win in five matches, fall to 23rd and are seven points behind Oldham.

"I couldn't have asked for more. I'm really pleased and so proud of the lads.

"I've been really backed and I know it's early days but I feel as though they've bought into me straight away and that's a nice feeling.

"Of course you're a bit nervous going into your first job. I'm just trying to bring out the best in each player.

"It's one game so it means nothing, but we've given ourselves a chance with the application we've shown."