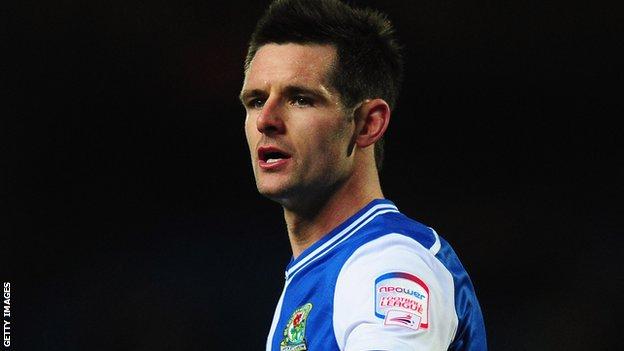 Blackburn centre-back Scott Dann has taken over the captaincy from midfielder Danny Murphy.

Manager Michael Appleton revealed he wanted Dann, 26, in charge as he looks to plan for next season and beyond.

"I had an honest conversation with Murph and explained to him I wanted to think about the future of the football club," he told BBC Radio Lancashire.

"I explained I was going to make Scott the new captain as I think he is someone who leads by example."

Dann arrived at Ewood Park from Birmingham City for £6m in 2011 on a four-year deal, but was part of the side that were relegated last season under Steve Kean.

I know people will be surmising about there is some rift there, but it isn't the fact. I'm just thinking about what Scott can do to improve the captaincy.

The Liverpool-born defender has been ever-present this term, starting every one of Blackburn's Championship games.

Former Liverpool and Fulham midfielder Murphy, 35, joined on a two-year deal last summer, but was left out of the match-day squad recently by Appleton for tactical reasons.

"It was a difficult decision to make but I think it's one that is going to benefit everyone at the football club," Appleton added.

"Danny took it very professionally, as I expected him to do, he's an experienced player these things happen and you have to make these decisions sometimes.

"I know people will be surmising about there is some rift there, but it isn't the fact, I'm just thinking about what Scott can do to improve the captaincy."

Appleton also confirmed he expects defender Adam Henley to miss the rest of the season with a hamstring injury.