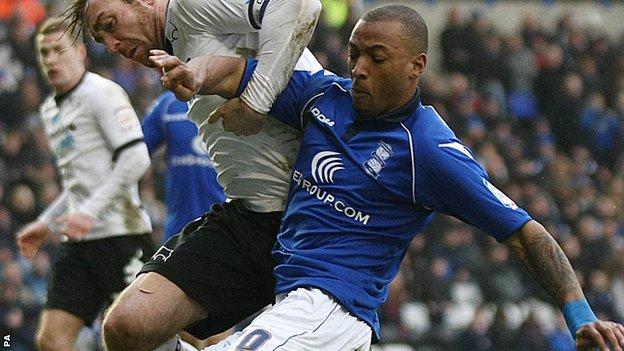 Birmingham's on loan striker Wes Thomas hopes his first Blues goals can secure him a permanent move from Bournemouth.

The 26-year-old signed a loan deal at Birmingham in January and netted twice in Saturday's 3-1 win against Derby.

"I'm buzzing to get my first goals. I wanted to impress the manager and prove something after not starting the last few games," he told BBC WM.

"I'm trying to win a contract at a Championship club, hopefully I get given the opportunity to stay here."

Wes is such a big threat. He's the real deal and is desperate to do well and sign permanently for this football club

He continued: "I'm hungry and I want to be here but at this moment in time I've just got to keep working hard, scoring goals and hopefully something will happen."

Thomas has not started a game for parent club Bournemouth since August and has previously expressed a desire to leave Dean Court.

Prior to arriving at St Andrews, the striker had spells on loan with Portsmouth and Blackpool earlier in the season, and he has now scored twice in six appearances for Blues.

Birmingham boss Lee Clark was delighted with Thomas's impact from the bench against Derby.

"I spoke to him last week and just tried to get him to be a bit more confident," Clark said.

"Wes is such a big threat. He's the real deal and he's desperate to do well here.

"He's desperate to sign for this football club and I'm convinced he can score goals at this level."