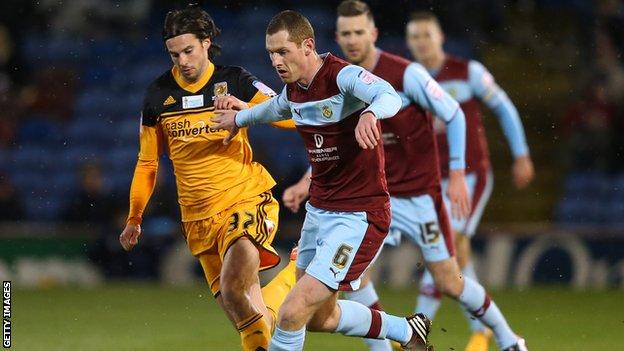 Burnley boss Sean Dyche believes his side are struggling to cope with the expectation of playing in front of their own supporters.

was the Clarets' fifth successive home game without a win.

"The bigger picture for us is a fear in the group all of a sudden - mainly from the expectation," Dyche said.

"There is a massive expectation at this football club. The crowd want Premier League football, as simple as that."

Burnley were promoted to the Premier League in 2009 as Owen Coyle guided them through the play-offs, but they spent just one season in the top flight before relegation.

Dyche took over at Burnley in October replacing Eddie Howe, with the club lying 14th in the Championship, and the side have been in reach of the play-off places for the majority of the season.

"The fact is, it's something we've got to change as a group. The margins are fine," he told BBC Radio Lancashire following the loss to the Tigers, played in front of Burnley's lowest league gate this term.

"You've not only got to deal with it but you've got to play and perform at the best of your level.

"We were doing that a short while ago, but now the same group of players look edgy and just constricted.

"It isn't going to go away, the expectation will be here so I said to the players it's about us changing it."