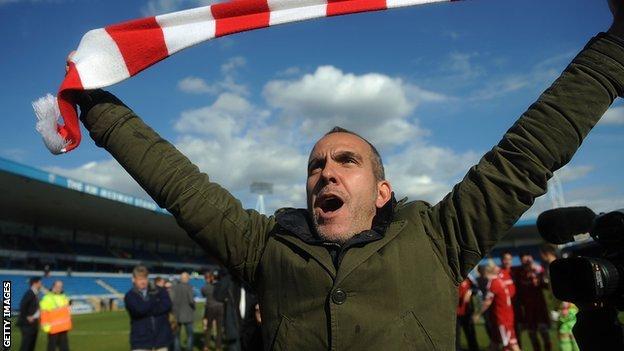 Paolo Di Canio has told BBC Sport he is ready to be a Premier League manager.

The Italian, 44, is the bookmakers' favourite for the Reading job after the departure of Brian McDermott on Monday.

"I proved in League One and Two that I was the best manager, and I now feel that I am ready for the next level," said Di Canio, speaking before McDermott's exit.

Throughout my time as a manager I have only had success. That success proves the methodology we used was correct and that me and my coaching staff were completely right in the way we do things

"I believe I am at a stage now where I am a Premier League or Championship manager."

The former West Ham, Celtic and Juventus forward spent 21 months at the County Ground, leading Swindon to the League Two title. The club was in the play-off positions in League One when he left.

Former Chelsea boss Roberto Di Matteo and ex-Southampton manager Nigel Adkins are also rated as frontrunners for the vacancy at the Royals.

The Reading Post reports that Di Matteo has been approached, while a number of national newspapers say Di Canio is the choice.

Speaking to BBC Sport on Friday 8 March, Di Canio said: "My plan for now is only to watch the top level of football - Premier League and Championship - because the next step for me is important.

"I have already proven my ability in League Two and League One, where there are many arrogant and average players and I was able to turn their mentality and help them become better footballers.

"You can imagine if I have the chance to do the same at the top level."

Di Canio said he planned to "go around the country and watch lots of football and training sessions".

"The right place for me is the place that has the ambition and the staff who want to bring in a winning mentality," he said.

"The club needs to have set rules, which for me are discipline, desire, passion, work ethic and a determination to get the right results to make everybody happy, which are the board, the fans and the club's players and staff."

McDermott, 51, led Reading to promotion last season, but the club had fallen to the bottom of the Premier League after four straight defeats.

In May 2012, Reading were taken over by Russian tycoon Anton Zingarevich, who acquired 51% of the club, and also announced a reshuffle in the boardroom.