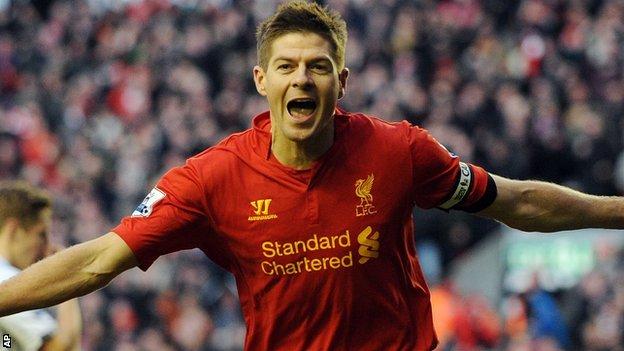 Captain Steven Gerrard says Liverpool need a "perfect" finish to the season if they want to qualify for the Champions League next season.

The Reds are sixth in the Premier League, seven points behind fourth-placed Chelsea with nine games to go.

Brendan Rodgers' side could reach 72 points if they win their remaining games - three more than Tottenham needed to secure fourth last year.

"Hopefully it's not too late," said Gerrard.

"We will need to produce the perfect finish to sneak in the back door. The top five places are the target. Let's see what happens in other big games that are not in our control.

"Hopefully the teams above us will slip up. All we can control is our performances and our consistency and hopefully we will finish strong.

"Liverpool don't belong in seventh, eighth or ninth in the table. We want to push for the European places year after year."

The Reds are on a good run of form, winning their last three games - including a 3-2 victory over Tottenham on Sunday - and have lost just one game in seven.

"We haven't got the points we've needed against the top sides," added the 32-year-old. "This result [against Tottenham] and performance will give us great confidence and belief.

"I'm hoping it will be a springboard for us to go on and finish the season really strongly.

"At times we haven't got what we've deserved against top sides but we can't look for excuses.

Liverpool, who finished with 76 points when they came fourth in the 2007-08 season, are two points adrift of fifth-placed Arsenal.

With 27 points left to win available, they trail Chelsea - who have a game in hand - by seven.

The team travel to Southampton on Saturday before the international break and take on struggling Aston Villa on 31 March.