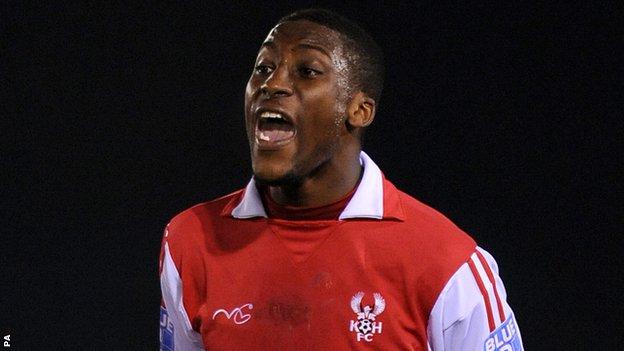 Aaron O'Connor and Lee Minshull went close for the hosts, before Michael Gash gave the Harriers a 27th-minute lead from Anthony Malbon's cross.

Newport quickly levelled through Andy Sandell, from the edge of the box.

Christian Jolley went close for County when his shot hit the post, but Dunkley snatched victory for the Harriers when he side-footed in from close range.

That took the Harriers to the top of the Conference table for the first time since they won the title in 2000 to earn promotion to the Football League.

But, after a Danny Lewis save and block from Dunkley prevented Minshull from putting Newport in front, Harriers took the lead.

A teasing run and cross from Malbon found Gash with the goal at his mercy and he prodded the ball home.

County were level within three minutes when Sandell found the net with a shot through a crowded box from the edge of the area.

Sandell and Scott Donnelly then had chances to put Newport in front but their attempts were well saved by Lewis.

Jolley twice went close for the hosts after the break, first hitting the post and then curling wide.

Harriers withstood further pressure as Donnelly and Jake Thompson both saw attempts fly over and Jolley's shot was saved point-blank by Lewis, before Dunkley found the net two minutes into injury-time after the ball had rebounded off the bar.

"This is one game ticked off out of 12 and we've got another one on Thursday.

"We haven't really got time to reflect or feel sorry for ourselves.

"We've just got to chalk up as many wins as we can from these 11 games.

"On another night, after creating so many chances, this could easily have been a victory for us."

"Nothing is impossible. We've got a chance. We'd heard that the Wrexham-Mansfield game was off and we wanted to take advantage.

"It was a difficult game for us in difficult circumstances, but there's more ways of winning a game than just through the forwards getting all the attention.

"From Danny Lewis, through the back four, to the lads up front, this was a backs-to-the-wall effort and we've done a tremendous job to come away with the three points.

"We've had to do everything we can to keep the ball out of our net but, at the same time, we always feel we'll get chances and, when the opportunities came for us, we put them away."

"It was a tough pitch. We couldn't get the ball down and pass,. It was very boggy. Any more rain and it would have been called off."