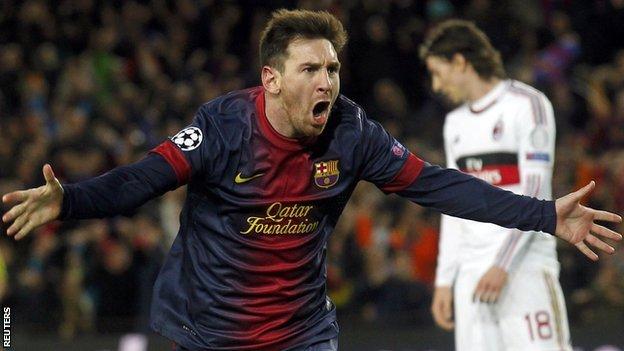 Barcelona made Champions League history by knocking out AC Milan to reach the quarter-finals.

First-half goals from Lionel Messi plus David Villa and Jordi Alba's second-half strikes made Barca the first side to overturn a two-goal first-leg deficit without help from an away goal.

Messi scored on five minutes, adding a second just before the break after Milan's M'Baye Niang had hit a post.

Villa then put Barca ahead before Alba sealed the win in injury time.

"We will remember this for years to come," said Barca sporting director and former Spain goalkeeper Andoni Zubizarreta.

"Messi's two goals put us in a strong position, Villa's was very important and Alba gave everyone exactly what they wanted with the fourth."

For all of Milan's excellence in the San Siro a fortnight ago, the kind of incision Barcelona have become renowned had been absent as they slipped to a 2-0 defeat.

Coupled with successive Spanish Cup and league losses to rivals Real Madrid, plus continuing doubts about the health of coach Tito Vilanova, questions were being asked about their future.

But Barca's usual zip returned on the vast Nou Camp pitch as they started the game at high tempo.

Such intensity was rewarded almost immediately as Messi played a neat one-two with Xavi before finding the top corner with a left-foot shot that left goalkeeper Christian Abbiati rooted to the spot.

The goal was the Argentine's 52nd of the season but his first in open play in 10 meetings with Italian sides.

In the first leg, Milan's tight, disciplined display left no gaps for their opponents to run through. At the Nou Camp, Barca were granted too much space on the edge of the penalty area.

The Italians survived two penalty appeals and a poor headed attempt by Messi before the tie's key moments came with just over five minutes of the first half remaining.

First, Milan striker Niang struck the woodwork after racing through on goal following a swift counter-attack from a Barca corner.

Then, Milan's advantage from the first leg was wiped out moments later as Messi fizzed in an unstoppable shot from 20-yards after Massimo Ambrosini lost possession.

When you go through a night like this, all of the bad days are forgotten. We do not care who we get in the quarter-finals.

Barca continued on the front foot after the interval and went ahead on aggregate for the first time when Villa finished clinically after he was picked out in the box by Xavi. The goal owed much to left-back Kevin Constant's rash attempt to intercept the pass before it reached the striker.

The visitors now knew they had to score to stand any chance of progression, prompting head coach Massimiliano Allegri to bring on former Manchester City striker Robinho.

This change nearly produced the breakthrough the Serie A side were looking for.

Barca youth product and fellow substitute Bojan Krkic put in a low centre that Robinho seemed certain to convert before defender Alba dived across to block the shot.

Alba then sealed a memorable win by slotting past Abbiati after a wonderful counter-attack following a Milan free-kick.