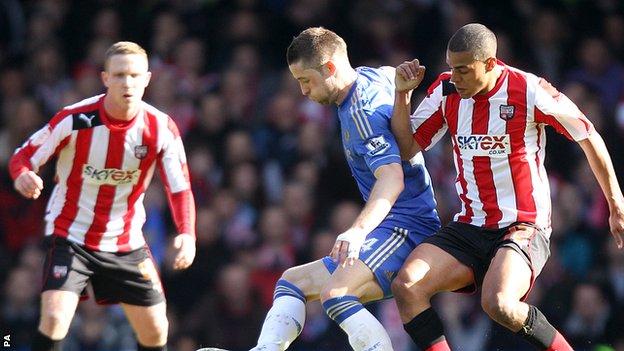 Brentford boss Uwe Rosler believes his side's league form suffered as a result of their strong run in the FA Cup.

The Bees, knocked out of the Cup by Chelsea in the fourth round, have only won five games in 2013, dropping from fourth to sixth in League One.

"We had a lot of replays, and the Chelsea game took a lot of our attention," Rosler told BBC Late Kick-Off London & South-East.

"It was a big event - I felt we lost our way a little bit in that period."

Despite their poor run of form, typified by losing 2-0 at Carlisle on Saturday, Brentford only lie four points off the automatic promotion places.

And former Manchester City striker Rosler feels his side's lack of experience meant they were always going to have a bad patch this term.

"I think we're right in the mix, and we are where we wanted to be," Rosler said. "Obviously we have such a young squad, we expected at some stage of the season we would have difficulties.

Rosler, 44, recently signed a new deal to keep him at Griffin Park until 2015, and he says the potential the club have for growth was the main contributing factor behind his decision to extend his stay.

"We want to progress each year," he added. "Last year we already started the process and went well this year. We've probably spent 75% of our games in the top six.

"There's a lot of things going on behind the scenes, and obviously with the stadium in place in 2016, that gives the club totally new opportunities in terms of marketing and income.

"I wanted to be part of the project and that's why I signed a new contract."