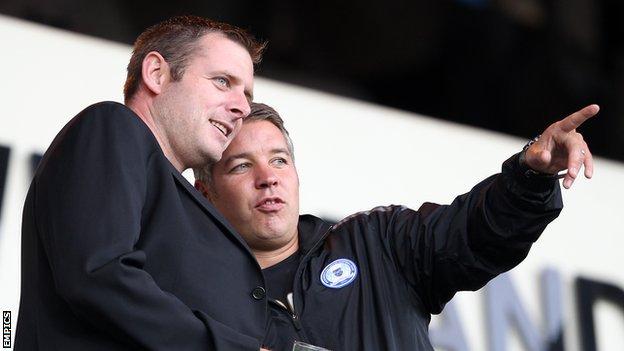 Peterborough boss Darren Ferguson has praised chairman Darragh MacAnthony for "staying strong" in the face of pressure to sack him earlier this term.

Posh failed to win any of their first seven Championship games but are making a late bid for survival.

"With the run we went on, we lost 14 of our first 18 games, there may have been pressure on him to make a change," Ferguson told BBC Radio Cambridgeshire.

"He's stuck by me, if that's what you want to call it. He's stayed strong."

but they can haul themselves out of the relegation zone with victory at Leeds on Tuesday.

Posh were rooted to the foot of the Championship when Ferguson ended his first spell as manager in November 2009.

They went on to be relegated to League One that season and were not promoted again until the Scot returned two years ago.

MacAnthony admitted recently that, in the past,

"Maybe people were wishing he had. I don't know," said Ferguson.

"Sometimes people have got be careful what they wish for and remember what happened last time."

The London Road club have taken five points from their last three outings and have 10 games left to maintain their Championship status.

"We've managed to stick together. There's been a real togetherness - a determination to prove many people wrong," said Ferguson.

"What we have to do is try to finish the job off."