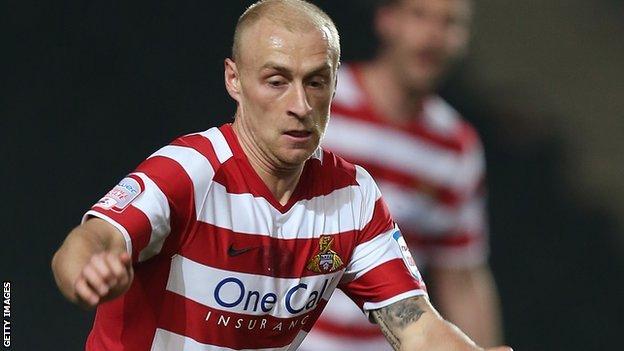 Doncaster Rovers midfielder David Cotterill has admited his career was going nowhere prior to his move to the Keepmoat Stadium.

The 25-year-old Wales international signed for Doncaster on a two-year contract in the summer after being released by Barnsley.

He told BBC Radio Sheffield: "Things had definitely stalled because I'd had two years of not playing regularly.

Cotterill has assisted 19 of Doncaster's 58 goals in League One this season.

"Thankfully, I've contributed well to the team this year."

Cotterill has scored 10 goals this season and contributed 20 assists in all competitions for the League One leaders.

One of the beneficiaries of his excellent form has been player-coach Rob Jones, who has scored seven goals.

"He [Jones] is very encouraging and he keeps you on your toes," Cotterill added.

"He's been brilliant off the pitch too and he's been a great help to everyone. He's a great leader."

Rovers, two points clear of Bournemouth at the top of the table, face play-off hopefuls Tranmere on Saturday.