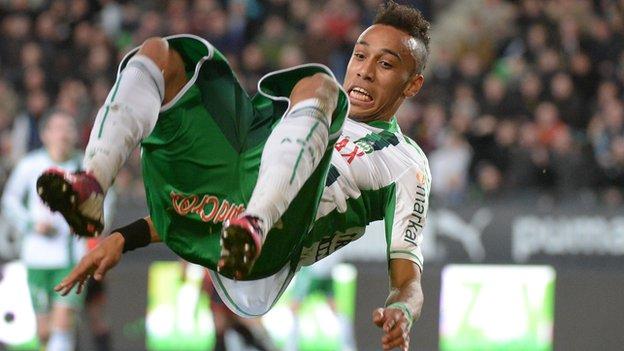 Pierre Aubameyang was on target for the 18th time in Ligue 1 - and remains the second top scorer in the league - after equalising in the 65th minute for Saint Etienne. Thanks to the Gabon striker's effort his side drew 2-2 away at Rennes.

Benjamin Moukandjo fired home his third for struggling Nancy who lost 2-1 at league leaders Paris Saint-Germain. The Cameroon striker had given the visitors the lead in the 36th minute but Nancy succumbed to two goals in the second-half.

Cape Verde striker Odair Fortes gave Reims some hope of getting an equaliser with his 77th minute goal, but an 88th minute substitution paid off for Troyes who sealed the points in added time. It was the Guinea striker's second goal for Troyes.

Tunisia's Saber Khelifa scored twice including one from the penalty spot to help his side Evian thrash Sochaux 5-1. Khelifa has taken his tally to eight goals.

Bordeaux clinched a lone goal victory over Bastia thanks to second-half substitute the Mali striker Cheick Diabate who was on target in the 57th minute.

Didier Drogba was a second-half substitute as Galatasaray lost 1-0 in a home game against visiting Genclerbirligi who are in mid-table. The Ivory Coast striker was introduced five minutes after Galatasaray had conceded in the 60th minute. Despite the home defeat, Galatasaray, who finished the game with 10 men, still top the table with a four-point margin.

Burkina Faso midfielder Abdou Razak Traore scored his first goal in the 79th minute to help his side Gaziantepspor came from two goals down to draw 2-2 with Akhisar Belediyespor. Traore had come on as a substitute at the start of the second-half.

Senegal striker Lamine Diarra equalised for Antalyaspor with his 11th league goal in the 29th minute but his side still lost 2-1 to Sivasspor.

Fellow Senegal striker Moussa Sow from Senegal scored Fenerbahce's last goal in their 4-1 triumph over Bursaspor who had taken a 2nd minute lead.

Another Senegalese, Tidiane Tane scored the only goal of the game after coming on as substitute for Elazigspor who beat Orduspor.

Ghana midfielder Bernard Kumordzi came off the bench in the 32nd minute to score in the second-half and help his side Genk beat Gent 3-2. Zambia's Rodgers Kola had scored the first goal for Gent after he equalised in the 23rd minute.

Nigeria striker Imoh Ezekiel blasted home in the first minute of the game to inspire 10-man Standard Liege to a 4-0 away victory at Leuven.

Morocco midfielder Rachid Bourabia scored the only goal of the game for Lierse who dismissed 10-man Kortrijk.

The attacking partnership of Mustapha Jarju and Aloys Nong reaped dividends as Mons outclassed bottom side Cercle Bruges 3-1. Gambia's Jarju was on target in the 62nd minute before Cameroon's Nong sealed the points with 10 minutes remaining after coming on as a substitute late in the first-half.

AC Milan played the last 24 minutes with 10 men but they still defeated Genoa 2-0. Guinea midfielder Kevin Constant had been sent-off in the 66th minute after he had received a second yellow card.

Senegal defender Boukary Drame scored the opening goal in the 12th minute for Chievo who beat second placed Napoli 2-0 to help his side rise above the relegation zone.

Zambia striker Jacob Mulenga is maintaining his fine scoring form after finding the back of the net with the only goal of the game for Utrecht who edged out Waalwijk. It was Mulenga's 12th goal of the league.

But the headlines still belong to Ivory Coast striker Wilfried Bony who has again extended his tally as the league's top scorer after accounting for the only goal for his side Vitesse Arnhem who squeezed passed FC Twente.

The new season is underway with several Africans in action in the 2013 Super League. But there was only one African in the score sheets after the first weekend. Yakubu Ayegbeni's equaliser was insufficient for Guangzhou RF who lost 4-2 at home to Liaoning Whowin. The Nigerian scored 26 minutes after Zambia's James Chamanga had given Whowin the lead.

Cameroon goalkeeper Charles Itandje conceded the last touch as the ball goes into the net, but despite the own goal his side Paok Salonika survived with nine men to beat Platanias 2-1.

The second half of the season resumed from the winter break at the weekend with only one African goal scorer on target. Ahmed Musa fired home his ninth goal for CSKA Moscow who triumphed 2-0 away at Krylya Sovetov. The Nigeria striker scored in the 72nd minute as the victory gives his side a five-point lead at the top of the table.

Congo Democratic Republic midfielder Cedric Makiadi conceded an own goal after putting the ball into his own net of Freiburg who were beaten 5-2 by Wolfsburg.

Ivory Coast striker Franck Dja Djedje scored the winning goal for Chernomorets Odessa in the 71st minute as they came from behind to beat Karpaty 2-1.

Egypt striker Ahmed Hassan scored from the penalty spot in the 71st minute to equalise for Rio Ave who drew 1-1 with Nacional.

Angola striker Manucho Goncalves scored his eighth goal after equalising for his side Real Valladolid in their 1-1 draw at home with Malaga.