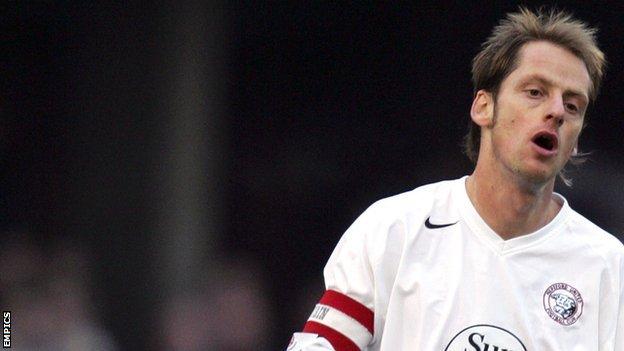 AFC Telford have been forced to appoint a fourth manager in 39 days in the wake of interim boss Graham Hyde's decision to quit after just two games in charge.

Hyde, appointed on 1 March after stepped down on Sunday, the day after the Bucks' .

Coach John Psaras has taken control of the Blue Square Bet Premier's bottom club until the end of the season.

"I want to galvanise the team and bring back some stability," said Psaras.

"Telford have now had four managers in less than six weeks, starting with Andy Sinton's departure at the end of January.

"Mark Cooper came in for a month then got a really good job offer so moved to Swindon.

"Graham Hyde was put in charge until the end of the season and things were going okay.

"The problem came on Saturday when a few fans confronted him after a terrible 2-0 defeat by Macclesfield, in which Telford had not managed a shot on target. I think Graham's thought 'Hang on a second, I don't need this' and decided to go.

"Successive managers have now tried but failed to deal with the apparent unrest in the dressing room. Surely the immediate focus now needs to be on addressing that".

"I've been asked by the board to try to steady things, get a bit more spirit into the players and carry on forward to see where that takes us," he told BBC Radio Shropshire.

Telford chairman and managing director Lee Carter admitted that Hyde's resignation had come as a surprise.

"Graham was very positive after the game on Saturday, but he changed his mind overnight," Carter told BBC Radio Shropshire.

"The pressure the club is under is really difficult to work in."

Telford started 2013 with Andy Sinton in charge until his sacking on 31 January.

Sinton went as the result of Telford slipping into the bottom four in mid-January, having not won a league game since 9 October.

They then went a further five games without winning under Cooper in February, in which they picked up just a point, before he joined newly-appointed Swindon boss Kevin MacDonald as his new number two.

Telford then turned to Hyde, only brought in by Sinton on 4 January as his new number two, to replace Mike Davies, who had resigned to concentrate on his business interests.

Their run of league fixtures without a win now totals 23, seriously threatening the Conference record of 26 set by Leamington in 1981.

Psaras, 47, one of Sinton's first appointments in June 2010 after 18 years on the academy staff at Walsall, has already brought in ex-Telford striker Alex Meechan as his number two.

For his first game in charge at home to Gateshead on Wednesday night, the caretaker boss has brought back striker James Spray from loan at Stourbridge.

But Psaras has offloaded defender Jordan Rose to Alfreton, while striker Jake Reid is set to join Welling United.