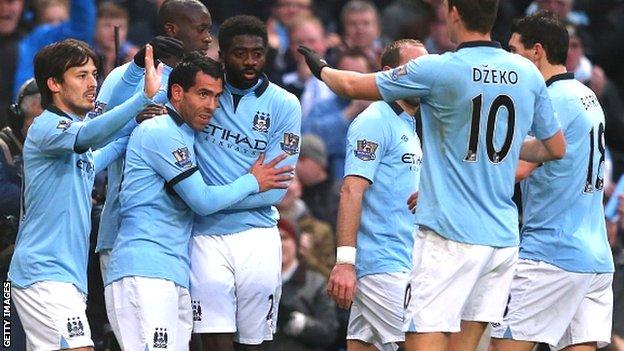 Manchester City will play Chelsea in the FA Cup semi-finals at Wembley on Sunday 14 April.

Chelsea came from 2-0 down against United at Old Trafford in the first match to draw 2-2.

The other last-four encounter, on Saturday 13 April, sees Wigan Athletic go up against Millwall, who defeated Blackburn 1-0 in a replay.

The ties will take place on the weekend of 13 and 14 April.

City have not met Chelsea in the FA Cup since a trip to Stamford Bridge in 1971 that ended in a 3-0 victory for the visitors.

Their two other meetings in the competition also came before the semi-final stage, with the sides claiming one win apiece.

Wigan are into the semi-finals for the first time in their 81-year history.

They will now face a Millwall side who reached that stage of the competition for the fifth time thanks to Danny Shittu's first half header in the all Championship clash with Blackburn.

"Words can't describe it," said Shittu. "To get the goal means so much.

"It is a big day and either side can win when we play Wigan."

The Lions last played an FA Cup game at Wembley when they lost the 2004 final to a Ruud van Nistelrooy-inspired Manchester United.