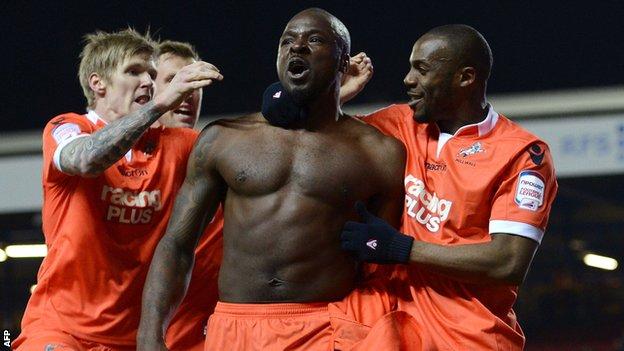 In a game of few chances, the Nigeria international rose to secure a place at Wembley from a Chris Taylor corner.

Blackburn failed to impress, with Shane Lowry's block on the line from Leon Best the closest they got to a goal.

Taylor also shot wastefully over at the death for the Lions, who now play Premier League side Wigan in April.

Despite competing for a trip to Wembley, only 8,635 supporters attended the game at Ewood Park - a figure which is less than a third of the ground's capacity.

The lack of interest seemed understandable in the early stages as the two teams continued their struggles from the scoreless meeting at The Den.

The only real chance in an opening half hour that featured a succession of aimless long balls came when playmaker David Dunn - starting in place of the injured David Bentley - curled a shot just wide of Millwall goalkeeper David Forde's far-post after a short corner from Morten Gamst Pedersen.

The match came to life three minutes from half-time as Shittu headed in a Taylor corner, before throwing off his shirt in celebration as he raced towards the travelling support.

The goal was proceeded by some debatable decisions from referee Mark Clattenburg.

Words can't describe it, we wanted to come here today and win, and to get the goal means so much

First, Millwall demanded a penalty after two quick-fire Dany N'Guessan shots were blocked at close-range by the arm of Blackburn defender Jason Lowe.

Then, as the ball broke free, Taylor's effort which was adjudged to have been deflected wide for the set-piece, appeared to take no touch off a home defender.

Blackburn manager Michael Appleton reacted by bringing on Nuno Gomes, but it was the Portuguese veteran's strike partner Best who came closest to a leveller.

The £3m summer signing did well to jink into space in the area and fire in a low shot that beat Forde but was kicked clear by the diligent Lowry.

Blackburn had only scored two goals in their last five Championship games, and they struggled again to force a breakthrough.

Indeed, it was Millwall who came closest to another as Taylor blasted over when played through on the counter as Blackburn pushed for an equaliser at the death.

As Millwall celebrated their first last-four appearance since the club-record run to the final in 2004, the home crowd booed their displeasure at another fitful performance from Appleton's side.