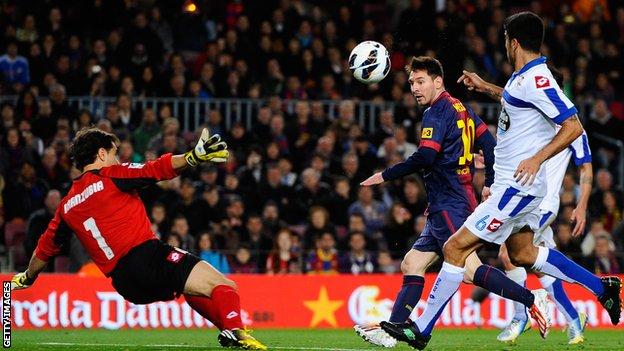 Lionel Messi scored in his 17th successive La Liga game, breaking a world record which has stood since the 1930s, according to his club Barcelona.

The 25-year-old came off the bench to register his 40th league goal of the season for Barca in the 88th minute of their 2-0 win over Deportivo La Coruna.

The world player of the year chipped in for his 27th goal in 17 matches.

"The Argentine player's tally represents a new record in the history of football, something no other player has achieved before," the Spanish club said on their website.

There was no immediate confirmation of Barcelona's claim by world governing body Fifa.

Messi has now scored 52 goals in all competitions this season, including five in the Champions League.

In December, Messi broke another record - that of the most goals in a calendar year - when he surpassed Gerd Mueller's 1972 tally of 85.

With Barca seeking to overturn a first-leg deficit when they face AC Milan in the last 16 of the Champions League on Tuesday, the Catalan giants started their match against Deportivo with several of their biggest stars, including Messi, on the bench.

Barcelona never needed to be at their fluid best to see off Deportivo. Alexis Sanchez gave them the lead just before half-time before Messi, who came on in the 59th minute, sealed victory two minutes from time.

"But there is no doubt that the best way to get ready for a match is having won the previous game."

"We have the league title in our hands and we are not going to let it slip away," Alexis said.