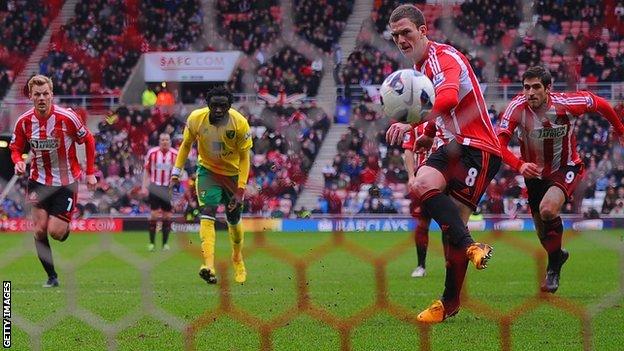 City led when Wes Hoolahan nodded in from a yard after Kei Kamara's header.

But the lacklustre hosts were gifted a way back into the game when Canaries goalkeeper Mark Bunn handled outside his box and was sent off on 30 minutes.

Craig Gardner soon levelled from the penalty spot after another disputed handball but Norwich held on with ease.

"At times it was impossible to tell who had 10 men because Norwich looked just as adept, if not more so, at breaking down the opposition. They had a really strong shout for a penalty of their own and Grant Holt should have done better when he went through on goal."

Visiting manager Chris Hughton will have been far happier with both the performance and a result which moves his side 10 points clear of the relegation zone prior to Wigan's game against Newcastle.

The Canaries were the better side for long periods, and managed to pose the greater threat going forward. They remained compact and disciplined, despite playing for more than an hour with 10 men.

But Hughton's pleasure will have been tempered by the two first-half handballs and a third close call which saw his side denied a possible spot-kick of their own after the break when Danny Rose handled on the edge of the box.

Sunderland, who edge seven points clear of the bottom three after a seventh successive game without a win, looked short of confidence and barely threatened after the interval until Stephane Sessegnon wasted a good chance in the final five minutes.

And the fact they looked so lifeless in attack and lacking in ideas and guile against 10 men is a major concern as they head into a difficult survival run-in. They face Manchester United, Chelsea, Newcastle and Everton in the next five weeks.

Sunderland were given every chance of addressing their miserable run when Michael Turner's defensive aberration led to Bunn's red card.

Up until then Norwich were the better side. They looked solid and organised and were largely untroubled defensively during an uninspiring opening half-hour which silenced the home crowd.

That chance apart, Norwich had posed the greater threat and, after a sustained spell of pressure, they took the lead courtesy of a well-worked corner when Hoolahan headed in Kamara's goalbound header from less than a yard.

But within four minutes Hoolahan's afternoon was over.

Former Sunderland centre-half Michael Turner tried to head the ball back to Bunn who came charging out of his area to clear his lines but could only block an awkward bouncing ball with his arms and was duly sent off.

Craig Gardner went agonisingly close to equalising from the free-kick but his effort beat both replacement goalkeeper Lee Camp, who came on for Hoolahan, and the post.

Norwich were furious and momentarily lost their composure, and a second handball call allowed the hosts to level from the penalty spot.

This time it was the other Norwich centre-half Sebastien Bassong who was the culprit, stretching his left arm out towards another difficult bouncing ball.

Wes Hoolahan is the first player from the Republic of Ireland to score a Premier League goal on St Patrick's Day.

Norwich felt Fletcher was offside in the build-up but referee Chris Foy awarded the spot-kick after consulting his assistant linesman Peter Banks and Gardner smashed home the penalty high to Camp's right to make it 1-1.

The game settled after a frenetic end to the first period but Sunderland's expected second-half onslaught never materialised.

Gardner saw another fizzing effort brushed over the bar by Camp soon after the restart and Sessegnon miscued a volley when well placed late on.

In between Norwich remained the more cohesive side and defended superbly and could easily have taken all three points. As well as the penalty shout when Rose's handball only resulted in a free-kick, substitute Grant Holt wasted a great one-on-one opportunity when he took a heavy touch.

"We had an opportunity to go and try to get three points. They were down to 10 men, we got back into the game and had the whole second half to force the winner and couldn't. It was a disappointing second half.

"My main concern was the chances. We should have created a lot more chances and were unable to do that.

"It's difficult - it's been difficult all season for us. But we have games still to play, tough matches, every one of them. But the whole league has been tough for us.

"They are all difficult games. This is the league. You play everybody twice, this is the run of games.

"But we had a situation around about Christmas-time when people were showing the fixture list then, and we were able to win back-to-back games against Southampton and Manchester City, so we have to go and do that again.

"My concern, obviously, is the players going away on international duty. I won't see them for some time and I'm hoping they come back in one piece."

"Everybody will speak about three big decisions, but I owe it to this group of lads to praise the quality of the performance.

"Yes, they had a lot of shots from outside the box, a lot of crosses we had to deal with and well, but I can't praise my players highly enough, to be down to 10 men for as long as we were.

"I thought in normal play we had probably the best chance of the game when Grant Holt was through - if his touch was a little bit softer, he was on for a one v one.

"But I can't remember a clear chance that Sunderland had, so I think we have got to give credit to a group of lads who were desperate to get something out of this game.

"The lad has come from an offside position [for Sunderland's penalty] - and that is the same linesman who gave the penalty decision. He has not given an offside and he has given a handball."