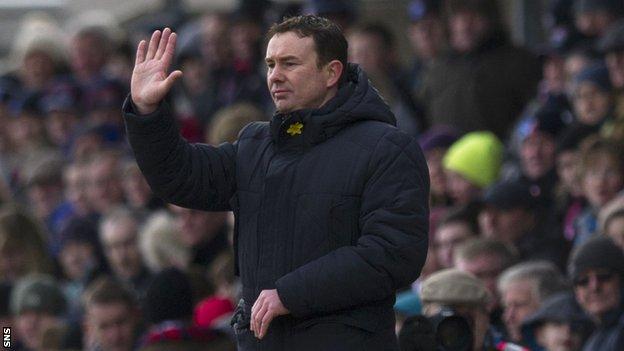 The Staggies bounced back from 2-0 down and Steffan Wolfarth nodded in an injury-time winner to extend their unbeaten run to 11 matches.

"We're trying to get into the top six," said Adams. We have three games to go, the top six is our next ambition.

"The SPL was our first, and now we look like we've done that."

Charlie Mulgrew and and Gary Hooper had put Celtic ahead inside 20 minutes in the SPL match at Dingwall before Grant Munro and Sam Morrow levelled before the break.

Substitute Wolfarth's added-time header sealed a stunning comeback for the Highland outfit and results elsewhere mean County now have a two-point lead over rivals Inverness who sit one place below them in fourth.

"It was a very good victory for us," said Adams. "Thoroughly deserved. Celtic didn't create any opportunities in the game. They were 2-0 up without really kicking a ball.

"Two crossed balls into the box that we know our goalkeeper should have dealt with better. Over the 90 minutes we had more opportunities than Celtic did."

County have not lost since a 4-0 defeat at Celtic Park on December 22, taking 27 points from their subsequent 11 matches - two more than Celtic have claimed in 12 games. and while he knew it would be a mountain for his players to climb against the champions elect, Adams insisted it was the correct result on the day.

"I thought it was going to be difficult to get back into the game," said Adams. "We had the belief in the side to pass the ball, close down Celtic and create opportunities.

"We knew Celtic would take a risk and push bodies forward. They did, and we were able to get at the back four or three.

"We passed the ball well at times, which isn't difficult to do that here.

"Then we had to close down Celtic, who have quality throughout their side - but I feel the best team on the day won the match because of the chances we created.

"From my point of view, I thought throughout the side, we were great."