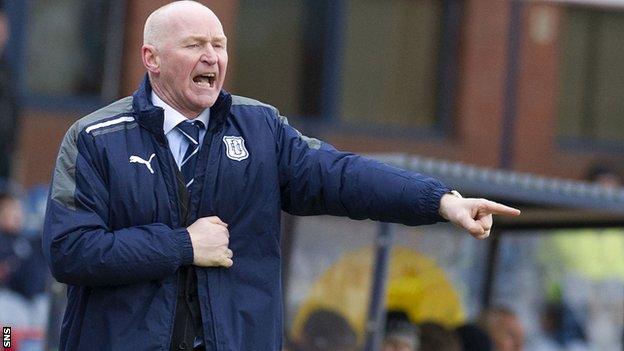 Dundee interim manager John Brown refused to blame his players despite conceding a late goal to draw against Inverness at Dens Park.

Brown's men took an early lead through a John Baird strike, but Billy McKay headed in an equaliser with seven minutes remaining.

"At 1-0, you're playing against a team that's pushing for a European slot," said Brown.

"I can't be critical of the team or the effort and desire they gave us today."

The draw was Dundee's second match in a row undefeated, but still leaves the Tayside outfit 14 points adrift of St Mirren at the bottom of the Scottish Premier League table.

However, Brown insisted his players gave him their best as the club seeks to avoid relegation.

"We needed that second goal," he said. "Caley were always going to be pushing, they have good players. We just never got the second goal to finish the game off.

"We hit them on the counter-attack, and we played some good football.

"We closed them down and never gave them time or space in the right areas.

"We lost a late goal, but they're a decent side to be focused on the 90 minutes. The players gave us everything and I'm really proud of their effort. I'm just disappointed we never picked up the three points."

Brown has now picked up five points from a possible nine in the league since he took charge at the club last month, but he insists there is nothing special he has introduced to the squad, other than instilling work ethic and encouraging his players to go out and enjoy the game.

"I've expressed to them to go and enjoy the football, work hard, give it everything and have a go," said Brown.

"There's no point in sitting back - the gulf in points we have, we've got to try and win games - and they're expressing themselves by getting in behind and getting the opposition on the back foot.

"They're working hard and that's all I can ask of them."