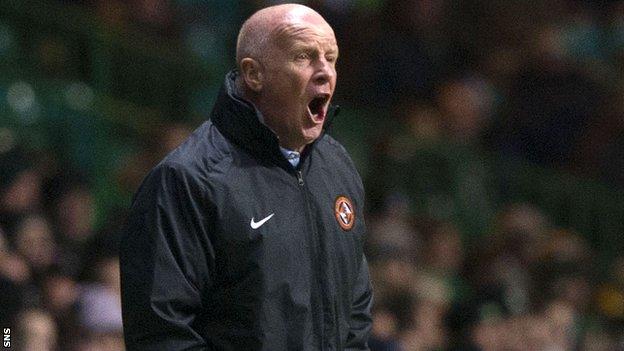 Peter Houston has told BBC Scotland that he has opened negotiations about a return to Hearts as manager.

The 54-year-old, who stepped down from the manager's position at Dundee United in late January, coached at Tynecastle from 1995 to 2004.

"I've spoken to Hearts and there will be further talks in the next 48 hours," he told Off The Ball.

"But there are other people in the frame. It's not just me. A lot of people are jumping the gun."

Hearts are seeking a replacement for John McGlynn, who took over in the summer but left last week, with the financially-troubled Edinburgh club second-bottom of the Scottish Premier League.

Tuesday's win over St Johnstone helped them climb one place in the table and coach Gary Locke will continue to oversee team matters for Sunday's derby visit to Hibernian.

The Tynecastle club has been available for purchase since Lithuania-based owner Vladimir Romanov made it known he was willing to sell in November 2011.

Funding from Romanov has been drastically cut in recent seasons, as have Hearts' operating costs.

"I had questions to ask and they were very honest - and we'll speak again.

"A lot of the players are out of contract at the end of the season and some of those are big earners.

"So, Hearts are coming back to what Hearts used to be.

"The club is going back to reality in many ways and will need to work under a structured budget.

"I was sceptical regards the situation but I was very pleased by what I heard.

"They are confident they can be self-sufficient but the next 18 months will still be very hard.

"Hearts are a fantastic club, they are a big club and a club that Scottish football needs."

Houston began his coaching career at Falkirk under Jim Jefferies, moving to Tynecastle as reserve and youth-team manager when Jefferies became Hearts boss in 1995.

He was caretaker manager when Jefferies left for Bradford in 2000 but had to settle for the assistant manager's position when Craig Levein took over.

Houston followed Levein to Leicester in 2004 and had further spells as Levein's assistant at Dundee United and with Scotland.

United won the 2010 Scottish Cup under Houston, who announced that he planned to leave Tannadice when his contract was up at the end of this season.

However, he decided to vacate his post less than a fortnight later and was replaced by Jackie McNamara.