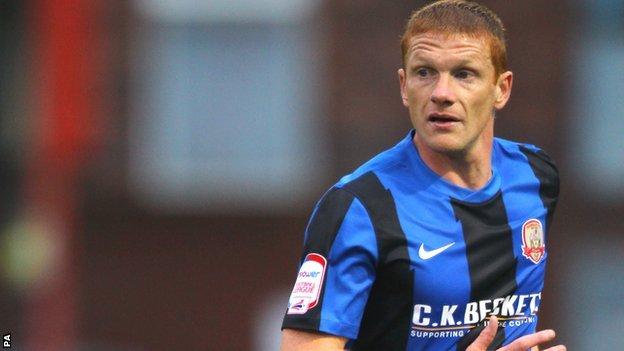 Hassell met a Jacob Mellis cross to net his first league goal in more than two years and take the Tykes two places and two points clear of the bottom three.

Watford could have capitalised on Hull's loss to in-form Nottingham Forest and climbed up to second.

Hassell, on as a sixth-minute replacement for the injured Rory Delap, scored his first league goal since scoring for the Tykes in a 1-1 home draw with Swansea on 22 January, 2011.

But they lacked their normal attacking flair and rhythm and created little.

The Hornets - the Championship's highest scorers - had the better of the first half hour and home goalkeeper Luke Steele had to tip away Jonathan Hogg's header while Matej Vydra blasted a 20-yard shot over the bar.

Barnsley had their first real effort on goal on 33 minutes when Jason Scotland forced a good save from Jonathan Bond.

And two minutes later, the Tykes went ahead when Mellis found space on the left flank and his cross was headed into the bottom left-hand corner by Hassell.

Chris O'Grady almost made it 2-0 at the start of the second half but Bond saved at his near post.

Vydra's volley forced a good stop from Steele, who also confidently dealt with a couple of late corners to ensure the home side's second win a week following the victory over Brighton on Tuesday.

"I'm completely buzzing, we set out a game plan and it really worked.

"At the start of the season we got overrun by them and today we've got up close and personal. We've got in and around what they do, we've put them under real pressure and we've returned with three points and victorious, and it's an honour to manage this football team at this point.

"I don't know many times Watford have not scored (this season), and I'm going to look that up when I get back to the office. We've kept a clean sheet against Watford, this can't be underestimated; the size of this performance, the level, the hunger, the desire that I spoke about before the game, it was just evident."

"But it ends there because sometimes you have to admit, when the opposition fights and plays the way they played, sometimes the better quality doesn't prevail - especially in the Championship when you have teams fighting for their lives, like Barnsley, and they make it difficult for you to play and you cannot overcome that.

"I think my players will learn a lot from today. For many of them, they didn't even know a game like this.

"It is the first time we have faced a team that has played and pressed us so much throughout the game. And as I said, many of them with learn. In my team I have a lot of young players and games like this will teach them a lot."