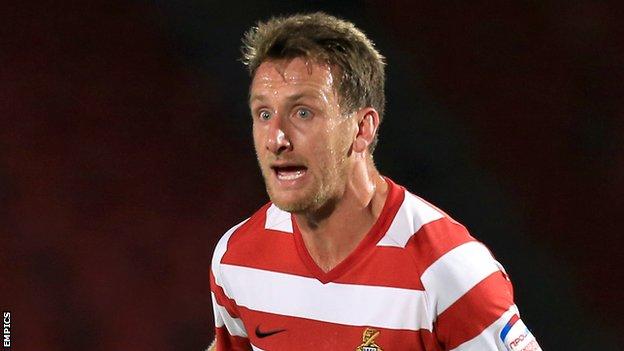 League One leaders Doncaster Rovers could only muster a draw at home to struggling Portsmouth.

In a scrappy first half, Chris Brown stabbed home his 10th goal this season from David Cotterill's low cross at the near post to give Rovers the lead.

Defender Rob Jones had a fine opportunity to double the advantage, but volleyed over from six yards out.

Pompey made them pay when Jed Wallace finished from close-in with his side's first real chance to level matters.

Wallace almost followed up his strike with a second, but his effort crept just wide of the post as neither side could find a winner.

The point means Portsmouth lie seven points away from safety, while Doncaster, who failed to capitalise on Sheffield United's heavy defeat at Stevenage, are two points clear of second-placed Brentford.

"I think it's a point gained, because I don't think we were at our best today.

"We weren't good going forward and that's part of our strengths.

"We have got a strong defensive unit, we know that. But I don't think our service to our two main strikers was good today."

"I think it's a tremendous point, especially really after the disappointment of Tuesday [a 1-0 defeat at Leyton Orient] where we've played so well and come away with nothing.

"I think to come up here and come from 1-0 down to come away with a draw at the league leaders I think is a fantastic effort.

"It's been building. I think if you take the results out of it, the performances have been really encouraging for the rest of the season and for next season."