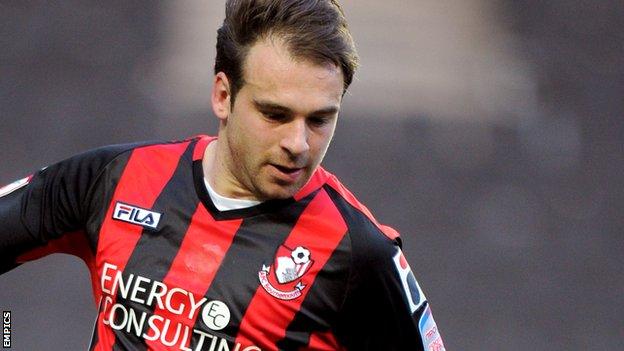 Brett Pitman scored his 12th goal of the season to defeat Oldham and help Bournemouth back into the League One play-off places.

Allsop then parried out Baxter's free-kick to give the visitors a vital win.

Pitman, who also scored the winner as Bournemouth ended a run of five successive defeats against Stevenage on Tuesday, almost added a second late on but his chip when through on goal could only find the roof of the net.

The result means the Dorset side move up to fourth in League One, while struggling Oldham remain in 21st.

"You look at the two fixtures on paper - Stevenage away and Oldham away - they're tests of character. Difficult places to come and we've managed to get two 1-0 wins.

"From all our defensive problems a couple of weeks ago it's two really good clean sheets and two excellent displays from the back four and the goalkeeper.

"I'm not going to deny that the performance wasn't the best we've given this season, but at this time of year it's all about the result. You can play well and lose games; it doesn't do you any good with eight games to go.

"We're in a position of winning games and we needed to win. We've done that today with a dogged performance, a disciplined performance."