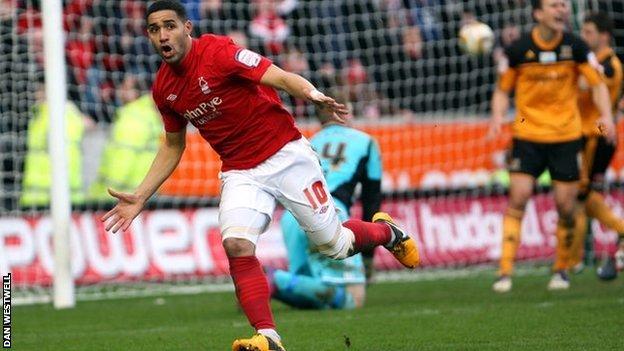 George Boyd, who failed a medical with Forest in January, gave the home side the lead when he flicked a shot over his shoulder with his back to goal.

Darius Henderson equalised with a 12-yard shot after a Simon Cox strike came back off the crossbar.

Lewis McGugan clinched the win when he slotted in Billy Sharp's low cross.

Forest close in on record

Nottingham Forest will match their club record of seven straight league victories, set back in 1922, if they can overcome Brighton after the international break.

The visitors survived some late pressure before securing a sixth win in seven games under manager Billy Davies as they moved up to fifth.

Hull remain second but could be usurped by Crystal Palace, who play Brighton on Sunday.

The hosts created the first notable chance of the game when Robert Koren's free-kick was parried by keeper Karl Darlow before on-loan Peterborough forward Boyd poked the ball over from six yards.

Boyd's celebration was to make a fake glasses celebration with his fingers after his move to Forest in January fell through over an "inconclusive eye test".

Hull also went close when a Jack Hobbs header was tipped over before Gedo nodded the ball straight at Darlow.

Forest eventually buckled when Boyd produced a clever finish to put the Tigers in front in first-half stoppage time.

The visitors responded when a Cox volley hit the crossbar before the rebound fell for Henderson to score.

The goal set up a grandstand finish as both sides chased the three points, with Forest prevailing when Dexter Blackstock nodded the ball down for Sharp, who crossed for substitute McGugan to roll the ball in from eight yards.

There was some late drama when Robbie Brady's free-kick hit the inside of the Forest post before substitute Jay Simpson's shot was scrambled clear by Chris Cohen.

Hull also went close when David Meyler's header was also hacked out from under the visitors' crossbar by Henri Lansbury before Gedo fired high from six yards.

"I thought we started not the brightest; we just didn't stick to our game plan and gave them too much space.

"They score a goal against the run of play, and in the second half we showed great courage and we went for it. We put on some very attacking substitutes and McGugan does what McGugan does best and gets the winner.

"We tried to win the game, especially at 1-1. We've given ourselves a great chance of the play-offs."

"I couldn't fault the way we played or the way we've gone about it.

"To be fair to Forest they've gone for it and played three up front, but the attempts we've had off the line and the post - it's just one of those horrible ones where the luck goes against you. Unfortunately it wasn't our day."