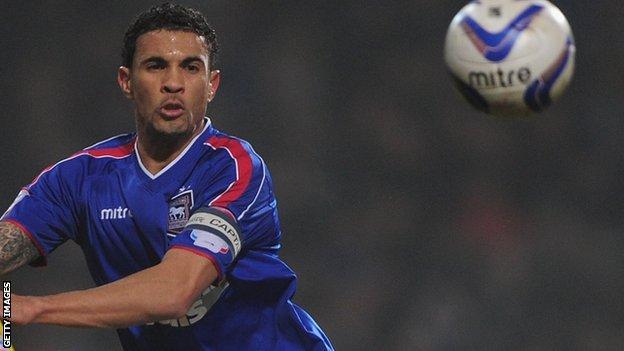 The Ipswich midfielder missed an early chance when he headed wide from close range before Daryl Murphy shot off target for the hosts at Portman Road.

Bolton have lost just three league games in 2013 and all have come away from home. They have won just three Championship away games this season

With two minutes to go, Jay Emmanuel-Thomas crossed for Edwards to turn in.

Bolton came into the game with hopes of making the play-offs following an eight-match unbeaten run which included five wins in a row.

But they rarely threatened Ipswich in a disappointing first-half for Dougie Freedman's side with Edwards, Andy Drury and Murphy going close for Mick McCarthy's Tractor Boys.

After the break, Murphy lifted a shot over when David McGoldrick was in a better position before Chris Eagles scuffed a shot wide for Bolton.

Davies' introduction improved Bolton and Tommy Smith had to block the Trotters' club captain from scoring.

Ngog then squandered his chance before Emmanuel-Thomas charged down the wing and crossed for Edwards who secured the three points.

"I've got friends in my office and just went in there and shouted, 'You beauty'.

"It was a huge result and a great three points. Teams don't come much more in-form than Bolton.

"To be fair, we've done alright against the form teams - we've struggled against the likes of Barnsley, Peterborough and Bristol City.

"I don't know why that should be, but we've certainly progressed. We've got better and become harder to beat.

"We had a really good first half.

"They had a spell in the second when they got on top, but when we changed our shape and stemmed the tide we deserved to win overall."

"Obviously we're disappointed with the result.

"It was a very hard-fought and physical Championship game. From the 60th minute onwards, I thought we were dominant in possession and created a few opportunities.

"We could have worked their goalkeeper a bit more, but we looked the more capable team towards the end and the most likely to score.

"We had the ball in the right areas, but were perhaps let down by the last decision whether to shoot, cross or control the ball in vital areas."