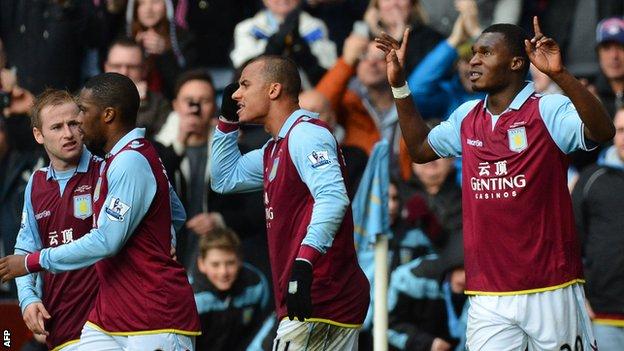 Aston Villa came from behind for the second week running to win and move six points clear of the relegation zone while keeping QPR rooted to the bottom.

Ex-Villa loanee Jermaine Jenas opened the scoring as he slid in a rebound.

Villa manager Paul Lambert said before kick-off that he was not "unduly worried" about the drop, and back-to-back league victories for the first time since May 2011 following last weekend's triumph at relegation rivals Reading will have boosted his confidence further.

The result also ended a recent revival from Harry Redknapp's side which had seen them beat Southampton and Sunderland in consecutive games.

Despite the pressure surrounding it, the match started at a sedate pace as the hosts knocked the ball around confidently without creating any chances.

As well as being the Premier League's fourth lowest scorers, at the start of the day only two clubs had conceded more than Villa, and the home side looked typically vulnerable as Rangers threatened with their first attack.

Keeper Brad Guzan was tested twice by Christopher Samba. First he pushed away the defender's dangerous looping header, then from the ensuing corner he scrambled to keep out a side-footed effort after Ciaran Clark's panicked clearance.

Villa v QPR at a glance

Samba was involved again minutes later as he clashed heads with Nathan Baker, with the Villa defender forced off with concussion.

This incident played a part in the opener as his replacement Joe Bennett under-hit an aimless pass into the centre of the pitch that was intercepted by Jenas.

The midfielder, who has been capped 21 times by England and scored a tremendous half-volley in last Saturday's 3-1 win against Sunderland, found Zamora and was quickest to react when the striker's effort was saved.

QPR were now in control and, after a superb curled effort from £8m January signing Loic Remy was saved, went within inches of doubling their lead as Jose Bosingwa rattled the post with a free-kick.

Villa counter-attacked and equalised against the run of play thanks to Agbonlahor, who nodded in unmarked from a deep Matthew Lowton cross with Bosingwa failing to pick up his man.

Spurred on by the late goal, a rejuvenated Villa dominated after the interval, with Weimann their most dangerous player.

First, he forced Julio Cesar to tip over the crossbar after being found at the back post by Bennett, then the pair were involved as Villa took the lead.

After QPR failed to clear a corner, the left-back put in an excellent diversionary run that opened up a gap for Weimann to beat the goalkeeper at his near-post with a low drive.

The momentum was with Lambert men's but QPR broke up the pitch and found the back of the net after Tottenham loanee Townsend's harmless shot on the edge of the area ricocheted off Ron Vlaar's leg and into the corner.

In prior months, Villa's lack of experience in the side had been cited as a cause of their relegation worries.

But that problem was not evident as they rallied to go in front as Benteke took advantage of some non-existent marking from the visitors inside the penalty box to slot in his 13th Premier League goal of the season unopposed after being found by a low centre from the excellent Weimann.

QPR reacted by pushing Villa back to the edge of their area in the final 10 minutes.

With centre-backs Clark and Vlaar at the fore, a number of high balls were repelled before Clint Hill, much to the relief of the majority at Villa Park, shot over with the last kick of the game.