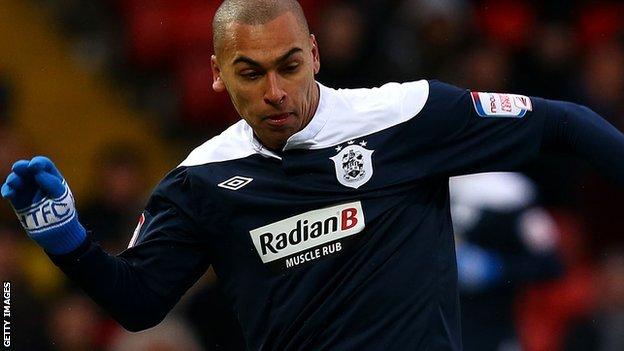 James Vaughan grabbed a valuable late winner for Huddersfield in their race for Championship survival in a pulsating Yorkshire derby at Leeds.

Aidy White equalised only two minutes after coming off the bench with a header when Jack Hunt failed to clear.

Rodolph Austin's volley then hit the bar for Leeds before Vaughan slotted home the winner after Hunt's fine ball.

The result represents a major blow for Leeds' hopes of sneaking into the play-offs. Manager Neil Warnock went into the match estimating his side would need at least six wins from their nine remaining fixtures.

The hosts started brightly though, with Luke Varney's header from Stephen Warnock's corner being cleared off the line and up onto the crossbar by Huddersfield captain Peter Clarke.

Terriers goalkeeper Alex Smithies then thwarted El-Hadji Diouf with a low save before Vaughan headed Danny Ward's cross against the bar for the visitors.

And just before the break, Leeds goalkeeper Paddy Kenny pulled off a superb save to deny Ward.

The opener came nine minutes after the restart when Vaughan's header found Danns and the midfielder, on loan from Leicester City, volleyed in his first goal for Huddersfield.

Soon afterwards, Warnock brought White on for Paul Green and within two minutes the substitute capitalised on poor defending to level the game.

Leeds had their chances to grab a second, but it was the Terriers who got the winner when Vaughan side-footed beyond Kenny and inside the far post.

"Realistically we're running out of games and [the owners] GFH know my situation, I speak to them on a regular basis.

"Once we're out of contention for the Premier League they know I won't be having another year in the Championship.

"They've got to look after themselves really. We've spoken about my successor, about people coming in if mathematically it's impossible to get into the play-offs."

"It was a typical derby game. The referee set his stall out early doors because he booked a couple of players and I thought there might not be 11 players left on the pitch.

"We grew into the game. We were resolute in the first half, got ourselves in front and conceded a really poor goal from our perspective because we started to drop [deep] and there was no pressure on the ball.

"But we kept our heads and although we were pegged back we were still in the game and although they were throwing bodies forward we dealt with it well."