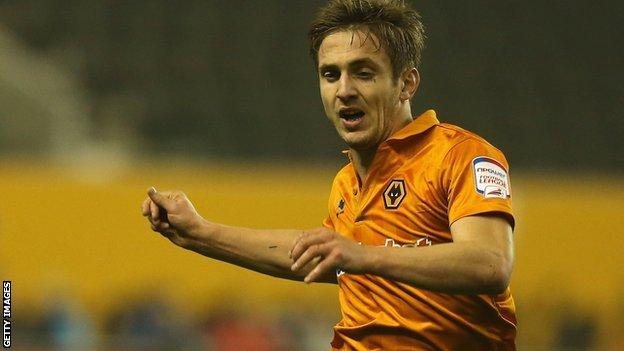 Kevin Doyle and Sylvan Ebanks-Blake scored for Wolves to earn a valuable three points as they came from behind to beat fellow strugglers Bristol City.

A bizarre first-half own goal from David Davis put City ahead as Wolves goalkeeper Carl Ikeme let the midfielder's backpass through his legs.

Doyle struck the winner two minutes later, heading in a cross from Hunt.

Wolves' comeback is the first time this season they have won after conceding the first goal in a game - and it was the first time Kevin Doyle had netted since scoring twice in the 4-1 win over Bristol City at Ashton Gate on 1 December.

Wolves came into this game with only one victory in 2013 and manager Dean Saunders still looking for his first win at Molineux.

The Welshman must have thought he was cursed when his side conceded the softest of goals in the 25th minute.

Ikeme played a short goal-kick to Davis who, under pressure, immediately passed it back.

But Ikeme miscontrolled and the ball dribbled past the red-faced keeper, who was promptly substituted at half-time.

Liam Fontaine then denied Doyle an equaliser before the break as the home side ventured forward.

Doyle and Ebanks-Blake both missed chances after the break before the latter levelled with a quick turn and volley.

Hunt then provided a cross to the near post that was nodded home by Doyle as Wolves moved to within a point of safety, while City stayed rooted to the bottom of the table.

Wolves manager Dean Saunders said: "I have to say that the character of the players has stood out yet again.

"Instead of laying down and dying they have come back and won the game. It was a big win.

"You have to keep your belief and you have to have the strength of character when the chips are down. So I am pleased the players kept going."

Bristol City manager Sean O'Driscoll said: "This is the Championship and sometimes you have to take the result, so I was pleased with the performance but disappointed with the result.

"At half-time we said that Wolves would throw balls into the box and, at 1-0 up, do you defend or do you throw caution to the wind?

"We were a threat on the break and we were comfortable. But, in this division, games can go either way."