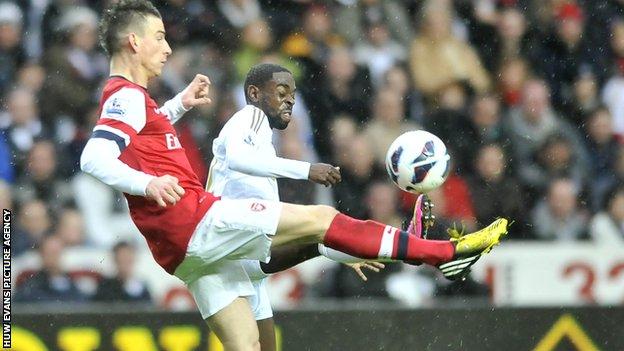 Monreal scored his first Arsenal goal when he struck a low shot through a crowded penalty area into the bottom corner.

Substitute Gervinho sealed the victory in stoppage time with a sharp finish.

Michu had Swansea's best chance, as his team suffered their third home defeat of the season.

Manager Arsene Wenger had described the game at the Liberty Stadium as a must win in Arsenal's quest to finish in the top four.

But his side were rarely in danger, with Swansea not fully testing goalkeeper Lukasz Fabianski, who was making his first league start in more than two years.

Arsenal nearly had the perfect start when Alex Oxlade-Chamberlain's curled effort rattled the crossbar after he had cut inside Angel Rangel.

Full-back Rangel was then presented with an opportunity of his own when his advancing run was picked out by Ki Sung-Yueng.

But with only Fabianski to beat, Rangel's first touch let him down and he fired wide with the outside of his right foot.

Swansea won 2-0 at the Emirates in December but Arsenal beat the Swans in the FA Cup in January, winning 1-0 in the replay after the sides had drawn 2-2 at the Liberty Stadium.

Michu, scorer of three previous goals against Arsenal this season, was set up by Jonathan de Guzman after an error by Carl Jenkinson but his volley on the turn went narrowly wide.

After a flurry of Swansea activity, neat build-up play by the visitors resulted in a chance for Santi Cazorla, whose dipping volley forced Michel Vorm into his first save of the match.

Cazorla's chance was the start of a good spell for Arsenal but the Swansea defence held firm and Ashley Williams blocked Theo Walcott's goal-bound effort.

On the counter Michu continued to prove a danger and Fabianksi had to dive low to deny him, although the assistant referee had already flagged for offside.

With the rain lashing, Oxlade-Chamberlain again came close when his swerving shot from 25 yards clipped the top of the crossbar three minutes before the break.

This was the fourth meeting of the season between the sides and Swansea were looking to complete a league double over the Gunners having won 2-0 at Emirates Stadium in December.

But Arsenal started the second half brightly and Cazorla's shot from the edge of the penalty area was well gathered by Vorm.

Swansea were restricted to speculative efforts and Michu failed to trouble Fabianski with an effort that flew over the crossbar while compatriot Pablo Hernandez fired wide.

Arsenal stepped up the pressure and the deadlock was finally broken by January recruit Monreal.

The Spaniard pounced to lash a shot across Vorm into the bottom corner with the help of a deflection off Williams.

Arsenal manager Arsene Wenger: "We will know at the end of the season how important this win is, but we knew as well the win was absolutely vital for us and we could not drop points today.

"We have shown we are up for the fight and we will do so until the end of the season. The attitude of the players was outstanding, even when our legs were less than fresh after playing in midweek.

"We kept going and refused to drop points. The players knew what was expected."

Swansea City manager Michael Laudrup: "I think in the first half we saw some good football from both sides.

"Our philosophies are similar and they had a couple of chances with Chamberlain hitting the bar, we had some good chances too.

"In the second half there was less good football. There was a lot of play in midfield but no shots on target.

"I thought it would be 0-0, but when things are like that the first goal will decide the game and that is what happened, it was a strange goal, but it was a goal and that decided the game."