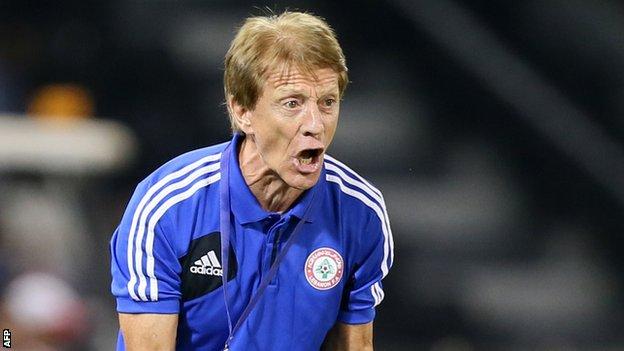 A national team head coach has revealed his torment after two of his players "sold out their country" and were convicted of match-fixing.

Lebanon defender Ramez Dayoub and forward Mahmoud El Ali have been banned for life pending an appeal after being found guilty of the offence by their national association.

The charges relate to incidents in a 2014 World Cup qualification game and a tournament in Jeddah, Saudi Arabia where the opposition were gifted a goal and an attempt was made to coerce a team-mate.

For German head coach Theo Bucker, who played for both Borussia Dortmund and Schalke in a 19-year playing career, the news has cast doubt on his own future.

"I'm really mixed up in my way of thinking these days," he told the BBC's World Football programme. "I don't know what the next step is."

Bucker, 64, first took charge of Lebanon at the turn of the century and returned in 2011. His second stint has proved to be hugely successful, with the nation progressing into the final round of World Cup qualifying for the first time in their history.

The achievement has proved bittersweet, however, as it was in the opening game of that stage that Bucker's suspicions of foul play were first raised when Dayoub played a poor back pass that led to the only goal in a 1-0 defeat by Qatar.

"We were showing some good action and then suddenly a [Qatar] player has the ball in a one-on-one situation and you get the feeling that something is wrong," he said. "The guy looked paralysed or something.

"I never came close to the idea that someone could not just sell the game, but sell their country."

"Then I checked the video and found that this guy had tried to make the same pass several times, helping the opponent striker to score - this was very suspicious," he added.

"We didn't have any proof and I was trying to find an excuse by believing that he couldn't handle the pressure of such an important game."

Any thought that he might have been mistaken was rejected in July during a tournament in Jeddah, Saudi Arabia when two Lebanon players tried to persuade their goalkeeper to leave the game. The keeper refused and reported the behaviour.

"This is a serious allegation," said Dayeb. "I have no doubt there's something behind this.

"If I really am guilty of match-fixing, [football's international governing body] Fifa will investigate and suspend me, not the Lebanese FA."

A Fifa statement has praised the Middle Eastern nation for the strength of their response.

The suspensions form part of the latest match fixing scandal to come to light in the wake of Europol's investigation into match fixing, which uncovered suspicious activity relating to 680 matches worldwide.