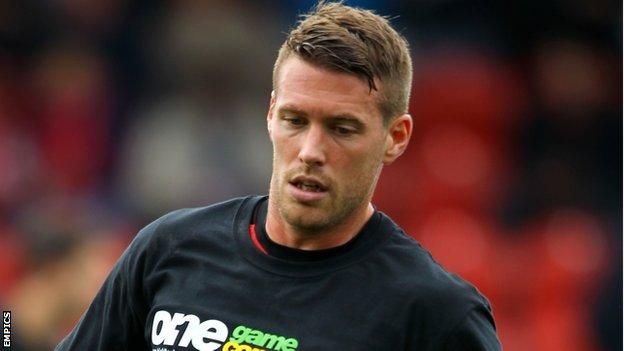 Shrewsbury Town's on-loan defender Rob Edwards could miss the rest of the season with a thigh injury.

After agreeing to extend his initial month-long stay at the Meadow, League One relegation battlers Barnsley hoped the 30-year-old would be available for their final 10 games.

But Town's medical staff say he is now out for up to six weeks after suffering a thigh muscle injury in training.

"It's just our luck at the moment," said manager Graham Turner.

"We could have done with him for the run-in.

"Everything was done on Monday regarding Rob's loan, but on Tuesday he tore his quad muscle.

"You can't legislate for this happening to an experienced player like that," he told BBC Radio Shropshire.

With the extension now in place, Town are unable to bring in a replacement, as they have used up their full quote of six loan players, with strikers Tom Eaves (Bolton Wanderers),Chris Porter (Sheffield United), midfielder Stephen McGinn (Watford) and defenders Cameron Gayle (West Bromwich Albion) and Yado Mambo (Charlton Athletic) also at the club.

Mambo is the likely deputy for Edwards at home to Leyton Orient on Saturday, but Jermaine Grandison, who is sidelined with a hip injury, may be fit to return for next weekend's trip to MK Dons.

Grandison has missed the last seven matches since being withdrawn, with the score still goalless, in a 2-0 defeat at Swindon on 19 January.