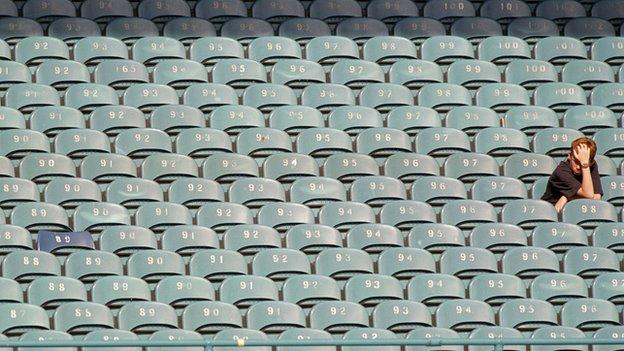 More than two thirds of Football League clubs who responded to a BBC survey say they are worried about the financial health of teams in the world's oldest domestic league.

Falling attendances and rising player costs have combined to deflate the mood as the league celebrates its 125th birthday.

"These are very challenging economic times and football is no more insulated from the effects of the recession than any other sector," a Football League spokesman said.

"[We] remain focused on creating a sustainable business environment."

The survey, conducted to mark Late Kick Off's return to BBC One on Sunday, was sent to key decision-makers at all 72 Football League clubs last month.

Forty-one clubs completed it, with a further 13 declining to do so or saying they were too busy. The remaining 18 did not reply at all.

How would you describe the financial health of Football League clubs in general?

How would you describe the financial health of your club?

Has the financial health of your club got better or worse in the last five years?

How beneficial or not is the Premier League for the Football League?

How concerned are you about falling attendances in the Football League and cup competitions?

How much of a problem are players' wages at your club?

Of those who responded, only one club rated the financial health of Football League clubs in general as better than adequate, with 29 out of 41 saying they were concerned - though respondents were generally more positive when it came to their own club's financial health, with only four rating it as worrying and 18 rating it as better than adequate.

The main culprit cited for financial worries is dwindling match-day revenues, with 34 clubs saying they were either concerned or extremely concerned about a drop in attendances.

One chief executive told the survey that 75% of clubs were experiencing a decline in attendances compared with last year. The managing director of a League One club said gates in his division were down 15%, with an average fall across the leagues of 4-5%.

"It's important to keep a long-term perspective on crowd figures as they can fluctuate significantly from season to season," the Football League spokesman said.

"Nevertheless, gate income remains the biggest single revenue stream for clubs so we are monitoring the situation - attracting and retaining fans remains a priority."

Until this season, Football League crowds had appeared relatively recession-proof, with eight consecutive seasons in which total attendance topped 16 million, and an average attendance per game double that of 25 years ago. However, the response to this survey supports research carried out in January by BBC Radio 4's You and Yours programme that revealed gates had fallen by an aggregate of 430,000 among clubs that had been in the same division for five or more seasons.

The reasons for this, according to the survey, are a combination of less money in fans' pockets and the amount of Premier League and European football on television. It is not, the clubs claim, for want of trying to reduce prices with early-bird specials, deals for children and other discounts.

Speaking to Late Kick Off in London and the South East, Millwall chief executive Andy Ambler admitted that crowds had fallen but said it was "up to us to fight hard to get them up", while Brentford's chief executive Mark Devlin claimed his gates were actually up slightly, but added: "Over a generation we have suffered with younger fans being attracted to teams playing at a higher level."

With less money coming in from the turnstiles, and the knock-on effect that has in terms of catering and merchandise, 28 clubs identified players' wages as a problem.

"The amount of money going out to players and agents is incredible," Chesterfield chief executive Chris Turner told Yorkshire and Lincolnshire's Late Kick Off team.

"It should have been stopped 20 years ago when it first started happening, but it's too late now."

Who responded to our survey?

Nine out of 24 Championship clubs

This sentiment was echoed by many, although a few clubs pointed to last year's introduction of "financial fair play" rules as a positive step.

Concerned about the clubs' £1bn of collective debt, Football League chairman Greg Clarke brought in measures to encourage teams to live within their means.

League One clubs are now only allowed to spend a maximum of 65% of their turnover on wages (falling to 60% next season), with the cap at 55% in League Two. Clubs who breach those rules face a transfer embargo.

The rules for Championship clubs - a move to limit losses to no more than £16m over five seasons - do not come into force until January 2015, but the accounting period starts next season. They too will face transfer embargoes for breaking the rules, and promoted clubs may be fined.

"[The rules] are about laying the foundations for a more stable future so clubs can avoid financial trauma, and their balance sheets can begin to reflect the long-term growth we have seen in crowds, media interest and commercial income," the spokesman added.

The optimism might not be as misguided as it sounds, despite the results of this latest survey. The Football League is no stranger to crises - the most dramatic of them in 2002 when its broadcast partner ITV Digital collapsed - but it has always demonstrated its fundamental resilience.

The ITV Digital fiasco saw clubs' TV revenues fall by 80%, causing a number of them to lapse into administration, but all survived.

Parachute payments from the Premier League for relegated clubs are £48m over four years (£16m for the first two years, £8m for the last two)

The Football League's TV and commercial income is shared on 66:20:14 basis between the three divisions

The current £195m TV deal with Sky, which is in its first of three seasons, is 26% down on the joint BBC/Sky contract that preceded it, but there have been no new administrations since Port Vale's in March 2012. And league bosses are confident the next deal will be better now that Sky has some competition for live rights in the shape of BT.

There are also hopes the Premier League's parachute and "solidarity" payments will increase in line with its huge new domestic and international TV deals. The Premier League currently gives £65m a year to the Football League in solidarity payments, with relegated clubs receiving £48m over four years to cushion the impact of demotion.

But challenges remain, not least the need to replace npower's £21m title sponsorship next season, and none of the 72 clubs is underestimating the difficulty of balancing fans' demands for progress with the reality of operating in a flat economy.

As one chief executive put it: "There are still too many clubs over-committing in pursuit of glory or survival at a time when generating revenues is getting tougher and tougher."

172 comments
Back to top
unknown