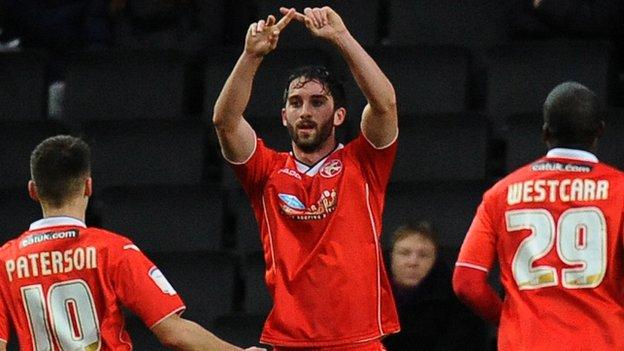 Walsall are close to tying up striker Will Grigg on a new two-year contract.

The 21-year-old has scored 16 goals this season, including five in two games, to elevate him into the top five in the list of League One marksmen.

Walsall boss Dean Smith wants a deal done for his top scorer before his contract expires this summer.

"We're a lot closer now. We're talking to his representatives. I'm positive we can get something sorted in the next week," Smith told BBC WM.

"Will wants his future resolved and we do as well.

The twice-capped Northern Ireland international's current deal expires this summer, but Walsall have put a two-year deal on the table in the hope that the Solihull-born former public schoolboy can maintain his current form, keep the Saddlers' play-off ambitions alive and ultimately do enough to earn himself a move to a higher level.

"We're looking at next season and the season after," added Smith.

"Hopefully we can get him tied up and he can go on banging in the goals and get a deserved move to a higher level, but he has to keep doing what he's doing here, not just this season but the season after to develop as the player we want him to be."

Grigg told BBC WM: "I came through the youth ranks here and they've done a lot for me.

"The gaffer gave my chance and I've taken it. I scored more goals last week than I did all of last season.

"But I just want to keep taking every game as it comes."

Walsall have agreed new deals with several players since the turn of the year, midfielder Nicky Featherstone having this week followed young defenders Andy Taylor and Paul Downing by putting pen to paper.

Smith's resurgent Saddlers currently stand eighth in League One, just five points off the play-offs, after their latest unbeaten run of six matches.