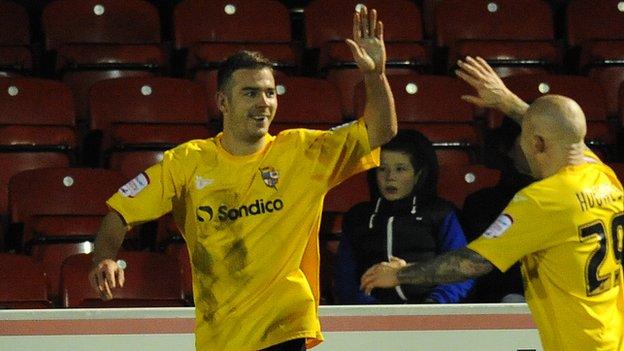 Port Vale striker Tom Pope insists he is not going to let any individual award overshadow the club's main target of promotion this season.

Vale's 27-goal leading marksman took to the stage to be voted League Two player of the year at the Football League Awards in London on Sunday night.

But Pope told BBC Radio Stoke: "It's an individual bonus. It certainly hasn't made me want promotion any the less.

"That's my ambition - what we all want to achieve."

He added: "It's a great achievement to be voted player of the season in League Two and one I'm very proud of. It doesn't come much better than that.

"But football's a team sport and, without my team-mates, I would not have won this.

"I got myself fitter and sharper in pre-season but all the goals I've scored have come from my team-mates."

The modest forward also admitted he was reluctant to accept his award at The Brewery in the city of London.

Pope, 27, explained: "I play in front of thousands of people. But when you've got cameras trained on you and 600 people staring at you listening to every word, it's the most terrifying thing in the world.

"It was a couple of minutes of agony standing on that stage. It was worth it go and get the award, but I'd rather have not been there, to be honest."