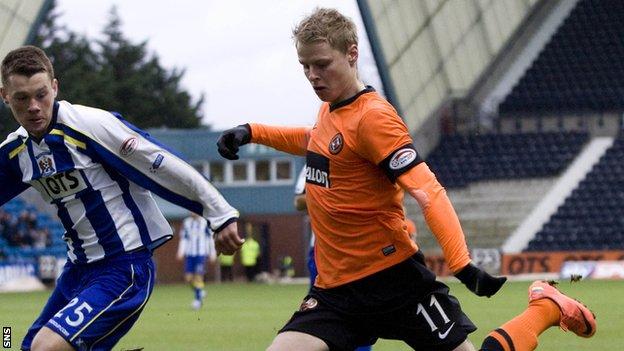 Gary Mackay-Steven has been included in the Scotland squad for the upcoming World Cup qualifiers.

Subject to clearance, Brighton midfielder Liam Bridcutt will also be available for the World Cup qualifying double-header against Wales and Serbia.

"Mackay-Steven has been terrific this season," said Strachan.

The Scots, who are bottom of World Cup qualifying Group A with two points, face Wales and Serbia on 22 and 26 March, respectively.

"I think it is only right that we recognise young Scottish talent," added Strachan.

"I see others playing in wide positions who don't make that impression. Gary wants to do something every time he picks it up that's positive. That's the kind of thing I'm looking for.

"He's not played too many games at the highest level but sometimes that can be a blessing."

Strachan said his assistant Mark McGhee, who lives in the Brighton area, "did his homework" into the player Bridcutt is and whether he wanted to play for Scotland.

"We put that all together and come to the conclusion that he's good enough, especially at the time in central midfield where we're losing Scott Brown and Darren Fletcher," the Scotland boss added.

"So, there's a hole there and hopefully Liam can help to fill it."

Despite scoring 19 goals this season, Hibs striker Leigh Griffiths has not been named in the squad.

"When we were putting it together on Monday, his name was mentioned a lot," said Strachan.

"He would probably find himself very unlucky not to be this squad but I've picked a squad that I know will do a great job over the next two games.

"Leigh was big in these discussions and is someone we're definitely not taking lightly and, there was a point where I had to perm two from three and he was in that three."

Strachan also refused to single out Wales' Gareth Bale for special attention, despite the Tottenham player's impressive recent form, despite describing the player as "world-class".

"It's no different to any other game I've managed," said Strachan. "There's always some people or some system that you've got to nullify.

Hull City forward George Boyd is also in the squad, and Strachan said: "George is a player I have watched for years - I tried to sign him at Middlesbrough - and is in good form."

The Scots host Wales at Hampden before travelling to Serbia for the second qualifier.