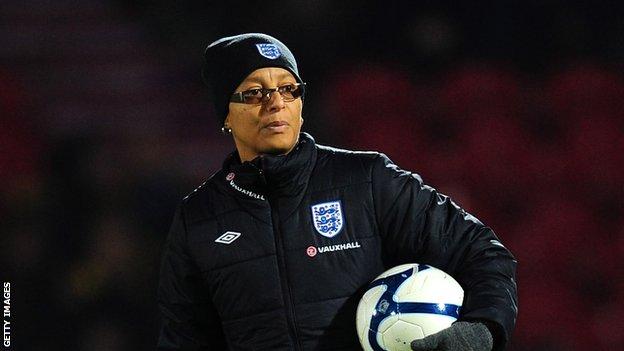 England opened their Cyprus Cup campaign with a 4-2 win against Italy in Group A as they began the build-up to July's Women's European Championship finals.

But Scotland, in the same group as England, lost 1-0 to New Zealand.

In Group C, Northern Ireland went down 5-1 to neighbours the Republic of Ireland.

They went ahead after just seven minutes through a tremendous 20-yard drive by debutant Nobbs as the 20-year-old Arsenal midfielder made a great start to her senior international career.

Italy responded with two goals by midfielder Elisa Camporese, who chipped in a 17th minute equaliser then scored from close range 10 minutes later.

Both sides created chances in the second half before substitute White clinched victory, the Arsenal striker driving in a 15-yard shot seven minutes from time.

England coach Powell said: "It was a really good start to our preparations for the Euro finals.

"The manner in which we played and stuck to the game plan was pleasing in a very competitive contest.

After winning their opening group game in 2009, England went on to claim a maiden Cyprus Cup title

"Our discipline was good, we kept the ball moving well and the only disappointment was conceding two goals after taking the lead.

"But we rode the storm, got ourselves back in front and I thought we ended up deserving winners."

Worryingly for the Scots, with England coming up in their second group game on Friday, both Arsenal midfielder Kim Little and Potsdam winger Lisa Evans had to be substituted early in the second half after taking knocks.

Manager Anna Signeul said: "It was a difficult game against a good New Zealand team, but we had chances and might have got a draw.

We rode the storm, got ourselves back in front and I thought we ended up deserving winners

"We are concerned about our injury situation, but hopefully players will be healed by Friday.

"It will inspire the girls to play against England after we beat them 2-0 here in Cyprus two years ago."

A depleted Northern Ireland side were outplayed by the Republic.

Debutant Alana McShane reduced the arrears after Diane Caldwell and Louise Quinn had given the Republic a two-goal lead.

"Basic defensive errors cost us, but we had an inexperienced team out.

"We had six regular starters missing and a number of girls made debuts including a 16-year-old in Laura Rafferty."