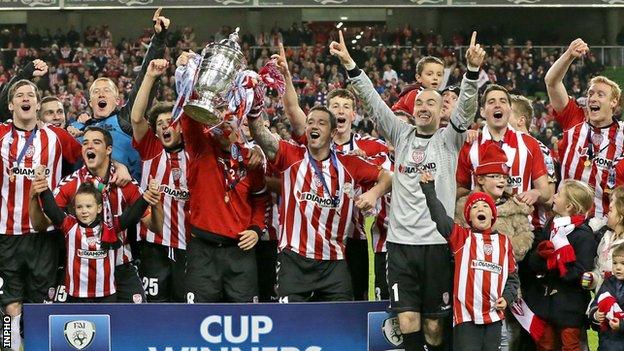 It is 16 years since Derry City last landed a League of Ireland Premier Division title. Too long for a club of their magnitude.

Of course, the intervening years have not been without their successes. There have been three FAI Cup wins, six League Cup triumphs - including an unprecedented four in a row - and some splendid European occasions.

In 2005, the then manager Stephen Kenny took his Derry team to Cork on the final night of the season requiring just a point to clinch the league. They lost the match 2-0.

The following season, the Candystripes again lost out on the final day to Pat Fenlon's Shelbourne.

More recently, the club had to dust itself down from the ashes after they were thrown out of the league towards the end of 2009 due to financial irregularities and operating dual contracts.

A three-year ban from competing in European competition was also put in place.

Now, the Foylesiders are back on a stable footing. Declan Devine - in his rookie season as a manager - delivered superbly in winning the FAI Cup, beating St. Patrick's Athletic 3-2 in a thrilling decider at the Aviva Stadium last November.

In doing so, he joins an elite group of Derry City managers including Jim McLaughlin, Felix Healy, Kevin Mahon and Stephen Kenny in bringing the blue riband trophy north of the border.

Devine was a worthy choice by the board of directors at Brandywell when he was appointed 14 months ago. He was a loyal lieutenant to Kenny and one of the most respected coaches in the domestic game.

He played a huge part in developing the talents of Paddy McCourt, James McClean, Niall McGinn, Danny Lafferty and Stephen McLaughlin - players who have all moved on to establish their careers across the water.

His target now, along with his trusted assistant Paul Hegarty, is to turn the cup specialists into title challengers.

That is no easy task, but they don't need to look too far for inspiration. Sligo Rovers have just landed their first league title in 35 years.

The Bit O'Red finally delivered for their fans after back-to-back FAI Cup successes, considerable financial investment and the introduction of a new manager Ian Baraclough - who arrived on the eve of the start of last season following Paul Cooke's departure to Accrington Stanley.

The Derry boss is working on a much tighter budget though.

Chairman Philip O'Doherty is understandably not prepared to plunge the club back into any sort of financial difficulties and Devine has to be spot on with his signings if the Candystripes are to improve on their fifth place finish from last season and bridge a 22-point gap on the champions.

He has strengthened his attacking options considerably with the acquisitions of former Dundalk duo Michael Rafter and Marc Griffin to accompany Northern Ireland international Rory Patterson.

He has also brought in wingers Paddy Kavanagh and Thomas Crawley in an attempt to compensate for the loss of Stephen McLaughlin to Nottingham Forest, and midfielder Sean Houston looks a decent signing.

But all the top clubs have added to the squads, not least Shamrock Rovers who have once again flexed their financial muscle and have bought in some serious talent under new manager Trevor Croly as they look to reclaim the league title.

Derry will settle for improvement on last season with third place within their reach.