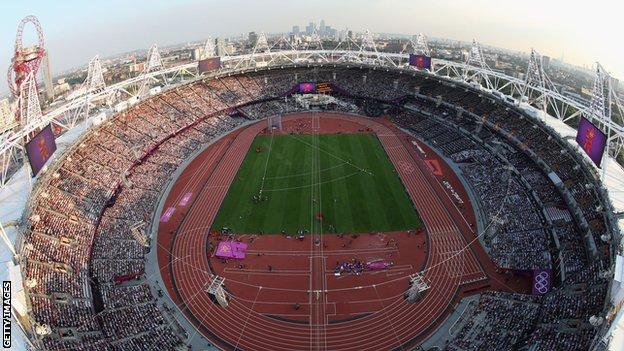 Leyton Orient chairman Barry Hearn will mount a legal challenge over the future of the Olympic Stadium.

London Legacy Development Corporation (LLDC) has named West Ham United as the preferred bidder to move into the venue and said the process had been "robust, fair and transparent".

But Hearn told BBC London: "We believe the rules of the bidding process set out by the LLDC have not been followed.

"We are challenging them by asking the High Court to issue a judicial review."

In a statement LLDC said: "We have been notified that Leyton Orient have made the decision to issue proceedings for judicial review.

"Whilst this is disappointing, we believe that our processes have been robust, fair and transparent and that the challenge is misconceived."

League One side Leyton Orient and West Ham were among four parties to bid for tenancy of the £429 million venue, along with UCFB College of Football Business and a consortium linked to Formula 1.

This is the second attempt to resolve the stadium's future use after the initial process which identified West Ham as preferred bidders collapsed in October 2011 following a legal challenge by Tottenham Hotspur and other difficulties.

Hearn argues that the current process carried out by the LLDC has ignored the possibility of Orient and West Ham sharing the stadium.

The O's chairman proposed a possible ground share with the Premier League side when the bidding process re-opened last summer but shortly afterwards West Ham announced they were not considering such an arrangement.

"All parties signed up to the principle of 'teaming' and we don't think that serious consideration has been given to Leyton Orient sharing or 'teaming' with West Ham in the occupancy of the Olympic Stadium.

"Our legal advice is that there is a fundamental flaw in the LLDC's bidding process that has to be rectified.

"I went to two Queen's Counsels to be instructed on this and they both agreed that this whole operation has been a massive mistake by LLDC.

"Those are their words, not mine.

"As such we are very confident the judicial review will show us to be correct and the bidding process will have to take into account the teaming principles.

"Clearly that has not been done and we want to know why."

The chief executive of the LLDC announced in November last year that the Olympic Stadium would not re-open until August 2015 at the earliest following delays in the bidding process.

The London Legacy Development Corporation board is set to meet on 26 March but earlier this week West Ham co-owner David Gold said they were closing in on agreeing a deal with them.

However, an extraordinary general meeting of the LLDC could be called if an agreement over the venue is reached before then.

Hearn believes that West Ham moving into the Olympic Stadium on their own would eventually force Orient out of business, and he has repeated his calls for the two clubs to occupy the stadium together.

"A major club can ground share with a smaller one," Hearn said.

"I don't think occupancy by West Ham and Leyton Orient hurts either team.

"It prolongs and extends the legacy of the Olympic Park and makes it vibrant.

"West Ham moving to the Olympic Park will put a huge amount of pressure on Leyton Orient to survive at all.

"We are 750 yards away [from the Park] trying to compete with Premiership football. We have no chance in the long term.

"The common sense way out is; why don't we share the ground?

"I don't understand why this principle of 'teaming' is being ignored by the LLDC and West Ham.

"Unfortunately and because of the intransigence of certain people we have to go back to court to have the original bid process disqualified."