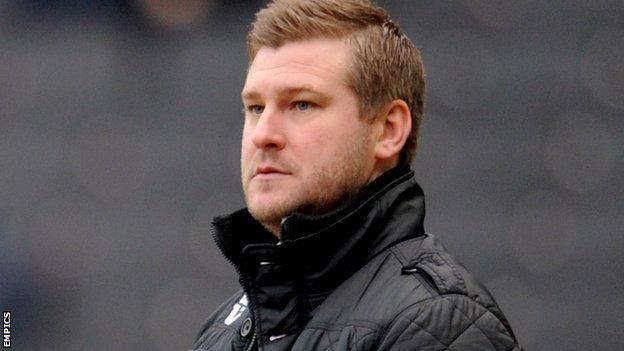 The Dons are 11th in League One and 10 points of the play-offs.

Robinson told BBC Three Counties Radio: "That was us at our best, we've not seen it often enough, and the reason is suspensions and injuries.

"It's frustrating in a way. Every time we've played a team at the top of the league we seem to have won and it just shows the quality we've got."

Robinson said he had been able to name his preferred attack for the first time since early in the season, which included Daniel Powell after the winger signed a new-two year contract.

Powell, 21, joined Izale McLeod and Stephen Gleeson on the scoresheet, with Rovers manager Brian Flynn admitting they had been beaten by the better side.

"It was a case of pick your moment, with Izale's first goal since his comeback, Daniel Powell topping off his new two year deal with a wonder goal, and then Stephen Gleeson scoring the last goal on his comeback from long-term injury," said Robinson.

"But the wins over Sheffield United and Tranmere were at the beginning of the season when we had Gleeson fit and Chaddy [Luke Chadwick] fit, and once again we had those players back fit and you see the rewards.

"I want to say a big thank you to the fans, because the stadium was rocking. Jose Mourinho said the world would stop for the match [between Manchester United and Real Madrid] at Old Trafford, but it didn't in Milton Keynes.

"It's important we keep doing the right things, the players and the fans, and that was for the fans. We have had a lot of stick and a lot of criticism, and it was important we stuck to our guns and to the team that we believe in.

"It could be the catalyst for bigger and better things."

"We know with Powelly we have a player who can turn a game in our favour in an instant," said Robinson. "He has added goals to his game, but there is still a lot of work to be done until he becomes the finished article."

Gleeson received a rapturous reception after coming on as a late substitute after a three month absence recovering from a broken foot.

"The boy has really, really impressed me off the field and he got a true MK Dons welcome for a top, top player," said Robinson.

"It was nice to see him come on and score because I know how hard he has worked behind the scenes and how tough it has been. He's as good a player as I have worked with at this club."

However it was not all good news for Robinson, who saw both Chadwick and Dean Bowditch come off in the second half.

"When players out for so long prone to pick up little niggles when they come back in. Chaddy has a bit of a groin problem, and hopefully we brought him off in time, but he and Bowditch will be a doubt for Saturday," said the manager.