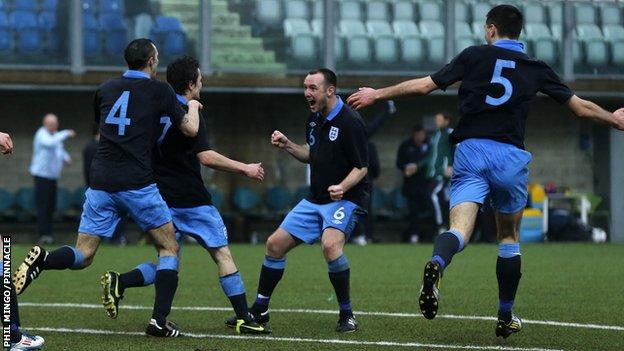 Jack Cannon's cross from 35 yards out evaded everyone as Jamie Savory put pressure on the Irish goalkeeper eight minutes after half-time.

Less than a minute later Savory doubled the lead, reacting first to a shot that hit the post.

Ray Whelehan volleyed an 81st minute consolation for the Irish to set up a nervy finish for England in San Marino.

"It was a superb display from Jersey. From Jimmy Styles in goal with a fabulous double save, to goal scorer Jamie Savory up front.

"No England representative has ever won their group, but what a fabulous chance this is now for the Jersey Football Combination to make history.

"The 10 minute spell in the second half when they got the two goals was worthy of winning the game, despite a number of Irish chances throughout."

The Irish side, representing Leinster and Munster, reached the final round of the tournament three years ago.

"It's the best performance in my tenure with the side so far," Jersey boss Craig Culkin told BBC Radio Jersey.

"All over the park we were deserved winners, and the confidence we can take from this and the team sprit is great.

"A lot of people didn't give us a chance and to beat the team that got to the finals two years ago shows what we can do, but it means nothing if we don't win the group.

"This is a team full of winners. We don't want to get too carried away, there's still a big job to do, but confidence is high."

No team representing England has ever made the final stages of the Uefa Regions' Cup.

Jersey play Northern Ireland in their next game on Friday, before facing the hosts San Marino on Sunday.

The group winner will go through to the last eight in Italy in June.